Now THIS Is How You Sell A Rap Battle 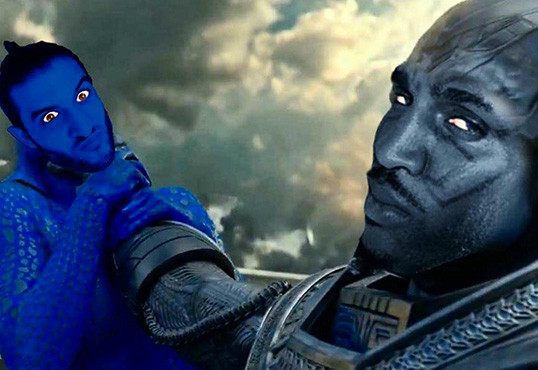 Making battle rap fans care about a specific match-up isn’t easy. There’s a seemingly endless supply of battles dropping on YouTube daily, and new cards announced all the time for fans to digest and debate. With so many thriving scenes around the globe, following the culture as a whole is getting more difficult and everything has become a blur of rappers shouting insults and threats.

Just look at this weekend. There are five full days of battle rap happening over the next 72 hours (no, that’s not an error) going down at KOTD’s “World Domination 6” event in Toronto and URL’s “Born Legacy 3” in New York.

Let’s break those numbers down a little bit more. Between the two events, there are 35 scheduled battles, featuring 70 rappers. Each rapper spits three rounds, which gives us a total of 210 verses. That’s way too much to keep track of.

Once the dust settles — and there’s bound to be A LOT of dust — only the very best (and the very worst) will be remembered.

So getting fans to care about a specific battle isn’t easy, and getting people who aren’t battle rap fans to care at all is damn near impossible.

Leagues make trailers and battlers make blogs or beef on social media to build hype, but much of it gets lost in the chaos of daily media competition.

Two rappers who’ve figured out how to ride the waves of that chaos are Daylyt and Mike P. They’ll be facing off in the headline battle on Day 2 of URL’s event on Sunday (August 28).

You’ve likely already read about Daylyt before for his attention-grabbing gimmicks inside and outside of the ring. The Irvine-via-Watts transplant is a master of bringing attention to himself — he’s part trickster and part troll, and an almost constant presence online that provides controversial commentary on whatever’s making noise at the time. He’s also one hell of a battle rapper.

Mike P is a fairly new addition to the scene, and his stock has started to rise with regular appearances on URL’s smaller cards in the last year or so. The Street Fighter bars from his battle against Tink Tha Demon went viral on Facebook earlier this year, accumulating more than 7.5 million views since late March.

Like Daylyt, the New York resident seems to be online all the time, commenting in Facebook debate groups or going live to interact with fans or to talk some shit.

Since before their match-up was officially announced, they’ve been butting heads while the Internet watches. Here’s a collection of IG raps they went back and forth with one day, collected by The War Report.

Be warned: it gets silly.

“Not a day has passed that we haven’t had some sort of altercation online,” Mike told HipHopDX. “From jokes to seriousness, it’s a constant. Internet tends to be a distraction to the task at hand but this is different, I’ve become overly focused from it.”

Both MCs know that each interaction helps build tension for their eventual meeting.

“People say me and Day’s battle is the only one they care about, BECAUSE of the fact we are promoting it,” Mike explained. “Before I burst onto the URL scene I was one of the more known new guys due to all the blogging and interaction. You have to be good first, but if you are, the Internet is the biggest tool you have for grabbing new watchers and fans.”

Mike says he knows part of being a successful battle rapper is making people care.

“You give them something to be interested in. Some type of backstory,” he said. “Almost guide them through the process of the battle. It makes my fans feel like they themselves are preparing for it. I see it in the comments. Core fans that know my Patterns. When I’m excited for a battle more than usual, they tell me, because they know me. And also, I’m a pretty interesting individual. People are more drawn to what you do when they have a feeling for who you are as a person. They relate, they care.”

HipHopDX also reached out to Daylyt for his thoughts ahead of the battle. Here’s his unedited response:

“I feel like I feel like uncle phill calling phill Collins and all I can do is ohh think twice in the air the fresh price of bell air is another day in paradise.”

Check out some more of their interactions below.

The one who crEats the one is God

Listen to the two face off on Angryfans Radio below.