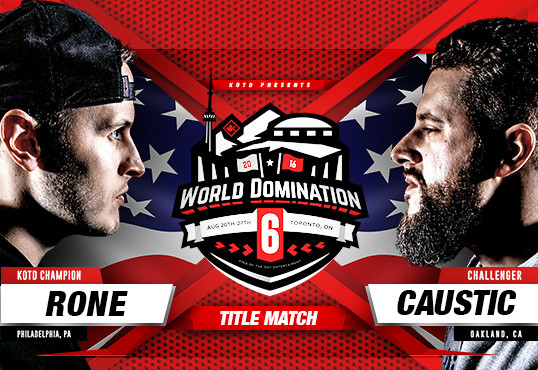 The King Of The Dot title is on the line again this weekend, as champion Rone makes his first defense against challenger Caustic at the league’s “World Domination 6” in Toronto.

The headliner is part of an annual three-day (four if you count the press conference) battle rap extravaganza that brings together rappers from around the globe to compete in front of the Canadian crowd. This year’s international rappers hail from England, South Africa, and Australia, and there is also a large contingent from across Canada and the United States.

The title match pits two emcees who have been in similar rap circles for years against each other. Their careers have followed similar trajectories, first breaking out in the Grind Time era of battle rap (and actually already battled there in 2009), and then becoming regulars on King Of The Dot with occasional appearances on other leagues.

In some ways they’re very similar: both are witty and charismatic, though stylistically their approaches are vastly different. Caustic has more of a slower, punch-heavy style whereas Rone’s content is typically more complex and shows off his rapid-fire delivery. Those styles stem from their personalities too: where Rone is more energetic and enthusiastic, Caustic is known more for his slacker persona.

In anticipation of the matchup, the two have been trading shots in trailers, blogs, on Twitter and in KOTD’s Talkback Facebook group, and the animosity between them gets thicker as the battle nears.

Title matches are somewhat of a throwback to a time when battlers mostly stayed in their home league. Now, many competitors are essentially free agents, bouncing to whichever league will meet their salary demands. Still, the title match does have some esteem as the last remaining high-stakes judged match in the North American scene. A win usually comes with a $1,000 victory bonus and enough bragging rights to last until the next title match six months later.

HipHopDX reached out to both rappers for comment when the match-up was first announced in July.

“I feel ready and, ultimately, disrespected,” Rone replied. “People ‘rah-rahed’ for me going into the title match and now I’m suddenly a bad champion? Why? Because I took care of business in the title match against a bad performance? It’s bullshit and I’m sorry that I have to take it out on Caustic,” Rone said, addressing the flak he’s taken from some fans who say he hasn’t been doing enough to rep the league as its champion.

Caustic was more positive in his response.

“I feel the best about battling I’ve felt in a long time,” the Oakland-based rapper said. “This is the most focused I’ve been since like 2010. I believe that I am one of the greatest to ever do it and now I’ve been given a platform to prove it. I feel like my old self again. This is going to be a very different title match than the last one. Leaving it all in the ring, going for blood, and bringing the title to Oakland for the very first time.”

According to an informal poll of 500 fans done by BattleRap.com, Caustic is going into this one as the underdog.

Although that seems to have only given him more motivation.

KOTD has been building hype for the battle with some blogs and trailers. Check them out below, order the live pay-per-view here, and check out BattleRap.com’s full preview of the entire card.

The King @adamferrone speaks about his matchup happening this Saturday at #WD6ix | Tickets & PPV at KOTD.tv

The first time I ever got flown somewhere for rap was when I first battled Caustic in Oakland in 2009. Look how far we've come.

Yeah, not to take the wind out of everyone's sails and wipe the foam from everyone's mouth, but I'm proud of us. https://t.co/nR67rjv1LQ