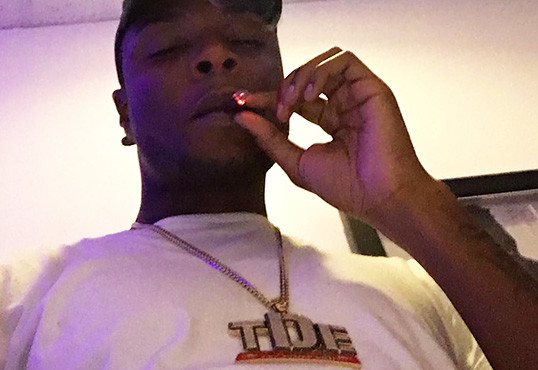 UPDATE: In today’s “you-probably-already-saw-this-coming” news, it turns out RetcH didn’t really sign to the label of Kendrick Lamar, ScHoolboy Q and Ab-Soul.

He clarified on Sunday morning (August 21) that he’d just been messing with people on Twitter, a couple of days after telling his followers he’d signed to TDE and posting a picture of himself wearing the signature chain.

“NO I AINT SIGN NO TO RECORD LABEL BUT I AM INDEPENDENTLY FUCKIN YA WCW TO YFN LUCCI WISH ME WELL 2,” he tweeted.

I FORGOT NIGGAS TAKE EVERYTHING SERIOUS ON HERE

(The article below was originally published on August 19, 2016.)

RetcH says he has joined the label of Kendrick Lamar, ScHoolboy Q and Ab-Soul, according to posts on his Instagram.

The up-and-coming talent out of Hackensack, New Jersey posted two photos of himself smoking a blunt and wearing a TDE chain. The first is captioned with “JUST SIGNED TO @TOPDAWGENT #1up.” In the second shot, he’s seen in front of a plaque for Kendrick Lamar’s good kid, m.a.a.d city album.

TDE’s president Dave Free quickly shot down the claim with a tweet sharing the label’s current roster. The “John Doe” slot is for the label’s newest signee who has yet to be revealed. Lance Skiiiwalker was once a “John Doe” before being revealed as an official artist earlier this year.

2DopeBoyz also had fun with the idea that Retch signed to TDE, making a meme of Spiderman with a TDE chain on saying he signed a deal. Free responded with laughing emojis.

Anyways, RetcH (A.K.A. Retchy P) has collaborated with Ab-Soul before, including on the 2013 track “Short $ermons” off his Polo Sporting Goods project.

In March, RetcH was arrested and faced up to 20 years for his alleged role in an armed robbery. In July, he confirmed that he was back home, though there haven’t been many details on the progress of the case.

Despite the jewelry and the album, the claim that he’s TDE’s newest signee comes after a couple of potentially dubious tweets about wanting to start a career in modeling and changing his rap name to 1UP-KY.

BOUT 2 CHANGE MY RAP NAME 2 1UP-KY, RETCH THE NAME THE HOOD CALLED ME I NEVA HAD A RAP NAME ALL MY FIENS CALLED ME KYRIE IM BACK ON MY BULLY