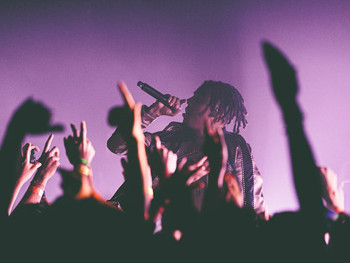 Vic Mensa still hasn’t revealed the title of his debut album after scrapping Traffic, but in an interview with Rap-Up, the 23-year-old MC reveals some of the features and production credits for his first LP.

“Papi Beatz on production always,” he says. “I’ve got a record with The-Dream that’s crazy. Rivers Cuomo from Weezer. It’s off-the-wall and unexpected collabs. There’s Mike Dean production. Me production. A lot of me production.”

The Weezer frontman previously dipped into Hip Hop when he worked with B.o.B on his debut album, 2010’s The Adventures of Bobby Ray. Mensa says that he connected with Cuomo because he sampled a Weezer song, and through Smoko Ono, they ended up in the studio together.

Mensa said that he had collaborated with Dean for Traffic as well. The producer is working with Desiigner and Kid Cudi.

This new album will be the Savemoney rapper’s first release on Jay Z’s Roc Nation. He details his relationship with the rap mogul and his wife Beyonce.

“They’re just smart people, really good people,” Mensa says. “That’s something I find as I meet more people in this industry: some of the top dogs are the kindest and in a sense most humble. A lot of people feel themselves when they don’t really have a right to. Hov and Beyonce are people that I’ve seen, on mad occasions, just be real cool to people that they don’t know. Beyonce has that queen personality where she makes people feel comfortable. Well, I mean, she probably makes people feel mad uncomfortable because they’re super fans, but she’s super cool to people that I’ve seen her interact with and she always has been really nice to me.”

And yes, Mensa has heard some music from Jay Z that you haven’t.

“I’ve heard a little bit of some Hov shit and it’s fresh as fuck,” he says. “But I can’t say anything about anything else.”