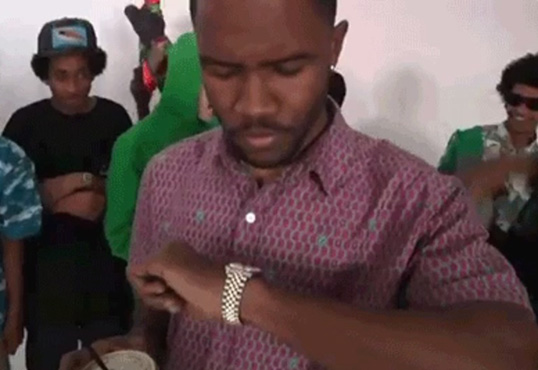 The world — or at least the part of the world that cares about Frank Ocean — is waiting.

Keep in mind though, Ocean never said anything himself about the album coming out Friday. It was a New York Times report that quoted an anonymous source with knowledge of the details of the Apple Music release.

Ocean’s devotees have been through this before though. A post on his site from last year includes the hashtags “#BOYSDONTCRY” and “#JULY2015.”

But hope still remains. There’s still some of August 5 left, and when he teased the “July 2016” date last month, he delivered the live stream on his website at the last possible moment to get in under the deadline.

Check below for some of the best reactions we found of people waiting on the project, and if you’re starting to feel antsy, why not listen to the soothing soundtrack of Ocean’s carpentry sessions?

Friday is almost over and Frank Ocean still never dropped the album pic.twitter.com/vW5S6vScbz

Frank Ocean teaching y'all that like time, and gender, he is also a social construct.

i hope everyone has a good day except u frank ocean

Frank Ocean is the biggest piece of shit. He's like that divorced father that promises to see his kids soon and never does.

All the #FrankOcean fans after they realize they got played for the thousandth time this year pic.twitter.com/1ADBxTJbFS

So y'all are capable of leaking government emails, but can't leak this one album??? #frankocean

Maybe the Frank Ocean album is already available on Tidal and nobody noticed.

is frank ocean even real at this point

Frank Ocean is the "Ima pay you back for sure" friend