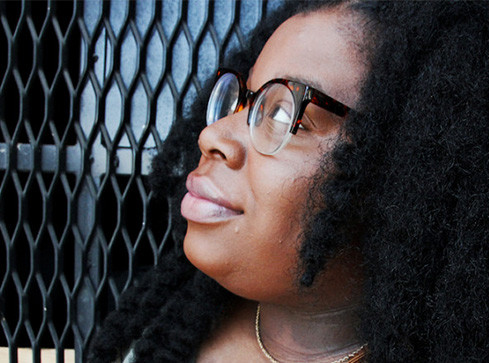 Linafornia Is Breaking Down Gender Barriers In L.A.’s Beat Scene

Los Angeles – A Friday night in May at Downtown Los Angeles cool kid spot The Crossing: it’s a night promoted as The Exchange. A diverse crowd hangs out before this full-figured woman with a beautiful smile and big braided hair gets them turnt as she transitions between alternative West Coast Hip Hop, Southern rap and her own mystical beats. Showing off her technical skill, she does this all without a laptop. Yup, it’s just her and a Roland SP-404.

I came to the event interested in seeing better-known artists Iman Omari and Sir.

But I left a fan of Linafornia.

Months later, the native of Los Angeles’ Leimert Park neighborhood is now kicking off this year’s Low End Theory festival, blending her eclectic taste in music and selections from her Dome of Doom debut Yung. For this set, she was accompanied by a dancer. “It started out with maybe five or seven people,” Linafornia told HipHopDX over ginger beer and beef patties at popular Leimert Park Jamaican restaurant Ackee Bamboo. “Then the end of my set, it was like 60 or 70. I was happy about that.”

This is a commonality with anyone who has seen Linafornia live. All it takes is one set. “Every show I do is an opportunity to gain a new fan or a new supporter, ” she said. “It always works out that way where every so often somebody is wowed and then start going to my shows. It’s been a really good year.”

Sounding like a blend of Madlib vintage soul claps and Organized Noize inspired bottom swing, Yung was two years in the making before wrapping up near the end of 2015. Released this year in January, LA Weekly contributor Jeff Weiss said, “During a time when the parameters of the beat scene are looser than ever, Linafornia delivered its best rookie album.”

Though many lean toward album highlights including “Hi Shrimp” or “Wetttt,” the Erykah Badu sampled “Xtractions” earned her real attention once the neo-soul legend gave her the nod of approval. “She was like ‘oh that’s pretty dope’ and she retweeted it to a million of her followers,” explained Linafornia. “I was like oh my god, that is amazing.”

Ironically, while creating Yung she won back-to-back titles at L.A.’s Beat Cinema competition. “It was really cool because for one I was broke and needed the money,” said Linafornia. “Then at the same time, I get to showcase my music and compete. Competition is a big thing to have. It keeps you on point.”

Born to Belizean immigrants, Linafornia started playing piano at eight years old. Music was just something she was always interested in. Trading 11 years of Catholic school for the public institution of Crenshaw High in senior year, the creative explosion began. “I loved going to Crenshaw High because they were so much more open to expressing myself and creativity,” said Linafornia.

She also formed a friendship with Left Brain and Mike G as Odd Future began its DYI rise. “[Left Brain] used to live walking distance from my house so I used to walk over there and hang out,” said Linafornia, who also counts Missy Elliott as a huge influence as well. “The first time I came over there I heard Madlib’s Medicine Show,” she said, talking about the 13-album series showcasing some of the iconic producer’s favorite records.

Like many millennial music production hopefuls, she started with Fruityloops before migrating to her signature SP-404 after seeing local mainstays including Samiyam use the sampling workstation. “You can make beats with it and you can deejay with it if you program it correctly,” she explained.

Thankfully, there’s an analog quality that sounds organic and less synthetic in how the samples loop and drums bang out. These beats are slow roasted to perfection.

“It’s about being versatile and paying attention to make sure everything comes out right,” said Linafornia, who is also picky about who rhymes over her beats. “But then you have a rapper on it, if they don’t execute their verses that well, then it doesn’t really compliment. If I do feature a rapper, I want to make sure that it fits.” One great example is the sole vocal track “Dot Wave” featuring Devi Wonder.

Spending time with Linafornia, it’s easy to see she has the makings of a future great: she has a unique style and is forward thinking. Most importantly, the vision is there. “If it takes me a while to make a beat, I just like to make things that I’m happy with,” said Linafornia. “Maybe it takes me a while to be happy with something but it’s worth it in the end because I’m getting exactly what I want. When I put out the album, I was satisfied with everything. I don’t care about rushing into things.”

Don’t expect Linafornia to produce 100 beats in a week and send them out to thirsty rappers lacking skill. She understands the potential of her brand and more so, the pressure within the hype built around her. If female emcees are still trying to break barriers in 2016, it’s probably even more difficult for women behind the boards. Between the breakout success of Wondagurl and even Tiffany Gouche’s buzz, the lane is opening up.

In an appropriate coincidence, the flat-screen television above us showed highlights from the Democratic National Convention. As the possible future of Los Angeles’ Hip Hop beat scene discusses being a minority in a minority-driven culture, the United States is one election away from its first woman president. Will the world soon see a female producer on the level of Pharrell, DJ Premier, Dr. Dre or Timbaland? Linafornia remains hopeful. “I would love to see that,” she answers. “I’m optimistic, I really hope and want to see that. For myself, it would be cool to work up to.”