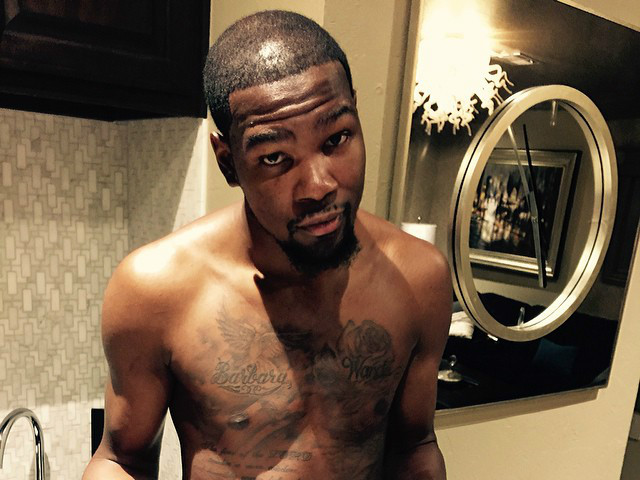 Kevin Durant has paid tribute to Tupac permanently with a big tattoo covering his left leg.

The now Golden State Warriors player showed up to Team USA practice yesterday with the fresh ink still wrapped. Mercury News writer Marcus Thompson pointed out the tat and posted it to his Instagram.

KD shared his reasoning for honoring the West Coast legend despite naming The Notorious B.I.G. as his favorite rapper

“To be so young and say the things he said,” Durant says. “Who is thinking like that at the age?”

Tupac died at the age of 25 in 1996, two years younger than the NBA MVP’s current age. The two grew up in close proximity. Tupac grew up in Harlem, New York and attended the Baltimore School for the Arts. Durant was born in Washington, D.C. and hails from the DMV area.

Durant will join Carmelo Anthony, Kyrie Irving and his new teammates Klay Thompson and Draymond Green in representing the United States at the Olympics in Rio de Janeiro. The games start in August.

Besides having Jay Z as his agent, KD has many Hip Hop ties. He’s hopped on the mic a few times, has received shoutouts from J. Cole, Fabolous and Wale and of course, is now free from The Based God’s curse.

Durant is a huge Pac fan, I just learned. Biggie is his favorite but he is supremely impressed with Pac's mind at such a young age