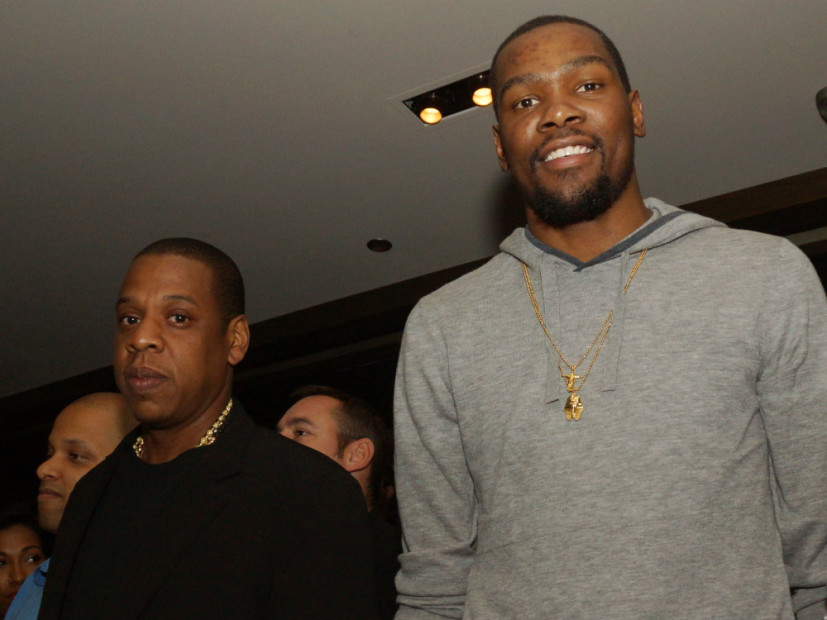 Kevin Durant might not be performing rap concerts like his fellow NBA All-Star Damian Lillard, but he has plenty of ties to the music industry.

KD was one of Jay Z’s first clients to sign to his Roc Nation Sports agency. Durant recently made the biggest splash of free agency by announcing he was leaving the Oklahoma City Thunder to join the Golden State Warriors.

In a recent interview with Genius sponsored by Nike, the MVP explains the significance of what Jay Z has been able to do as a sports agent. Last year, he made another client, Dez Bryant, the highest-paid wide receiver in the NFL.

“When I signed with Roc Nation, it felt like it was a changing of the guard with how being a professional athlete was run,” Durant says. “It just felt like it was a new regime, which is we kinda kicking down the door on how operations used to go and we’re just doing it our way now.”

The 27-year-old also speaks on Hov shouting him out on “Crown.” In the Magna Carta Holy Grail song, the New York legend details his journey into the sports industry and name-drops Durant and baseball player Robinson Cano.

“That was wild,” KD says of hearing his name of the track. “When I heard that one, I was like, Jay Z, that’s somebody I’ve been listening to since I was 10 years old. I don’t care what the beat sound like or anything. It was just that he put my name in a song, that was a moment for me.”

Another shoutout that impressed him was when Fabolous referenced him on “Steve Jobs.”

KD says he was honored to be mentioned by a rapper who he’s been listening to since middle school. And he says he was impressed that it wasn’t just a name-drop, but true wordplay.

“When he said that, I was like, this is, he’s just not throwing a name in there or throwing something together,” Durant says. “He really thought about it. So that’s how you can tell the good ones.”

The scoring champion has gotten behind the mic a few times and was featured on Wale’s More About Nothing mixtape on the “Best In The League Skit.” In the minute-long clip, the DC rapper eggs on Durant as he sheepishly lists off his accomplishments.

He explains that his personality is not one to brag, but since recording the skit, he’s learned there’s a time and a place to flex a little.

“I can’t run around and just scream out everything I’ve done, ’cause that’s just not who I am,” he says, “but I guess I had to get cocky for that one and as awkward as it sounds, you can tell that’s not me. I was nervous and I was like, ‘You have to tell me what to say.’ Now, I add a little bit more flavor and swag and sauce than I did back then, but that humbled me a lot.”

Watch KD’s interview with Genius below: