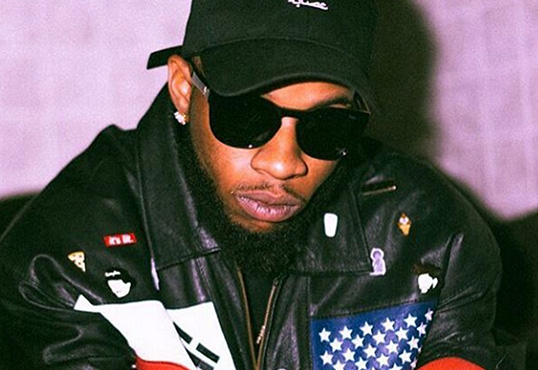 Tory Lanez Says "I Told You" On Debut Album

I Told You is made up of 28 tracks including fan favorite, “Say It.” Nearly every song is accompanied by a skit. Lanez decided to go all solo and does not have any features on the project.

The LP is released through Benny Blanco’s Mad Love label on Interscope Records.

Stream Tory Lanez’ debut album, I Told You below:

Tory Lanez has revealed the cover art and tracklist for his debut album, I Told You.

The LP is now available for pre-order on iTunes and the page says that the project is made up of 14 tracks including the smash hit “Say It.”

I Told You is set for an August 19 release via Benny Blanco’s Mad Love label on Interscope Records.

The Toronto trap singer reportedly was offered a spot on XXL’s Freshman Class of 2016, but turned down the opportunity.

View Tory Lanez’s I Told You cover art and tracklist below:

After more than six years of making music, Tory Lanez is prepping to release his first official album.

The Toronto artist has caught a fair amount of buzz for his mixtapes and recent singles, most notably the hit song “Say It,” which peaked at #23 on the Billboard Hot 100. The audio and video of the song have done just over a combined 138 million views on YouTube since last July. More recently he dropped the dancehall-inflected “LUV” in time for summer.

Lanez also announced a massive North American tour supporting the album. He sets out on July 22, just days before his 24th birthday, and wraps up on December 7 in Boston. So far his hometown fans are still waiting to hear details about a Toronto stop, but Lanez has said that more shows will be announced.

Readers with amazing eyesight can check details below. Everyone else can visit the tour website.

76 SHOWS IN NORTH AMERICA. MORE TO BE ANNOUNCED. #ITOLDYOU

MY DEBUT ALBUM 'I TOLD YOU' DROPS AUGUST 19. THE I TOLD YOU TOUR . ONSALE FRIDAY https://t.co/13DFrq6ZI1 pic.twitter.com/Os2vpw11Rj