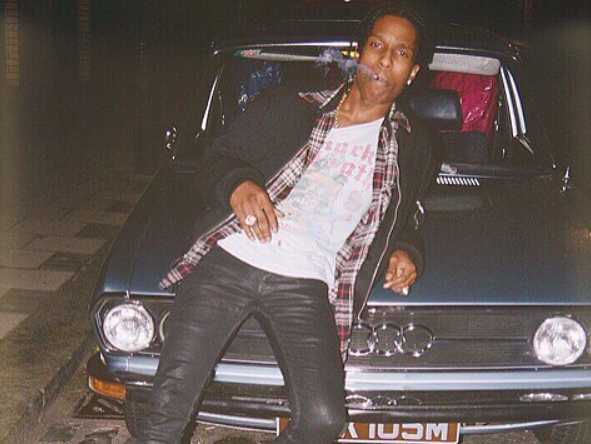 An old A$AP Rocky interview has landed the Harlem, New York rapper in hot water. In a piece published by Time Out Magazine in September of last year, Rocky made some comments about the social injustice and police brutality going on in Ferguson, Missouri at the time with the death of Michael Brown. Rocky says his views have since changed, but the interview is still available for the public to see.

“I’m A$AP Rocky,” the 28-year-old told Time Out Magazine. “I did not sign up to be no political activist. I wanna talk about my motherfuckin’ lean, my best friend dying, the girls that come in and out of my life, the jiggy fashion that I wear, my new inspirations in drugs! I don’t wanna talk about no fucking Ferguson and shit because I don’t live over there! I live in fucking Soho and Beverly Hills. I can’t relate.”

The excerpt randomly surfaced on Twitter Friday (July 15) and caused a major backlash with the Twitterverse dragging the A.L.L.A. rapper by his scalp.

Rocky responded to the criticism with a few tweets, some of which have since been deleted (but not before The Shade Room got ahold of them) and says that his views on the subject are now different.

“IF NIGGAS WANNA GAS INTERVIEWS FROM OVER A YEAR AGO, BE MY GUEST, ALL THIS SOCIAL INJUSTICE MAKES ME FUKIN SICK, THO IM STILL NO POLITICIAN,” he posted. “FUK ALL THESE COPS KILLIN THE URBAN YOUTH DEM, N FUK ALL YALH NIGGAS FOR DICK RIDIN ON BASH ROCKY DAY, LMAO, UNTIL NEXT TIME TWITTER”

A$AP Rocky appeared in a PSA addressing social injustice alongside Rihanna, Beyonce, Chris Rock and other celebrities giving “23 Ways You Could Be Killed If You Are In Black America,” this week. Each celeb named how 23 Black people have died seemingly without cause as of late such as, “Selling CD’s, outside of a supermarket,” referring to Alton Sterling or “Wearing a hoodie,” referring to Trayvon Martin.

The video was presented by Alicia Keys‘ “We Are The Movement” and can be supported here to “tell President Obama and Congress that the time for change is now.”

Rocky’s tweets regarding the backlash over his Ferguson comments are below.

FUK ALL THESE COPS KILLIN THE URBAN YOUTH DEM, N FUK ALL YALH NIGGAS FOR DICK RIDIN ON BASH ROCKY DAY, LMAO, UNTIL NEXT TIME TWITTER

#ASAPRocky addressing backlash from an old interview that resurfaced where he said that he did not sign up to be a political activist, & he would rather talk about his life and lifestyle as a rapper, than focus on social injustices