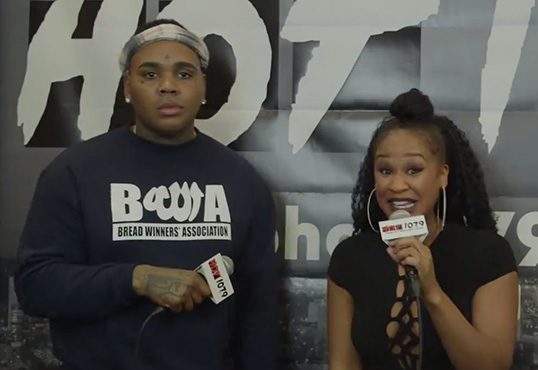 Atlanta, GA – Depending on who you ask, Kevin Gates either gave the greatest — or the rudest — interview ever this past weekend.

Either way, whoever you asked is probably exaggerating, but Gates did have a pretty fascinating back and forth with DJ Traci Steele ahead of his set at Hot 107.9’s annual Birthday Bash concert in Atlanta on June 18.

The warning signs come early in the just-over two-minute clip, as the interviewer reaches out to touch Gates’ arm in a friendly gesture. He recoils slightly, then quietly wipes his sleeve off where she touched him as they continue to speak.

In a follow-up post that Gates shared on Instagram, the rapper explained why he didn’t want to be touched.

“First of all, I’m married. Second of all, I’m holy. Don’t put your dirty-ass hands on me,” he said.

The conversation only gets more awkward from there, as Steele asks him questions and then speaks over him while he tries to answer them. The New Orleans rapper’s responses are mostly short, but he maintains a level of respect throughout, letting her finish her thoughts and addressing her as “ma’am” while staying straight-faced and serious.

She tries to get him to talk about his plans for the future and he answers three separate questions with: “I don’t let the left hand know what the right hand is doing.”

He briefly waxes philosophical about the journey of life, and, when asked about his thoughts on the Birthday Bash, says the energy is “ok” but that he wouldn’t truly know until he hit the stage. “I’ll form my assessment based on my experience,” he says flatly.

At the end of the interview, the Murder For Hire 2 rapper gives the same annoyed look to the camera that he did in a viral clip when a fan rolled up on him for a photo as he was shopping in Hollywood.

Interviews aren’t easy, especially when the interviewee gives you as little to work with as Gates does here, but Steele stays exceedingly positive throughout the interview.

Watch the video, which has amassed more than three million views on Facebook, below.

For a more talkative interview with Gates, check out his recent conversation on BigBoyTV: