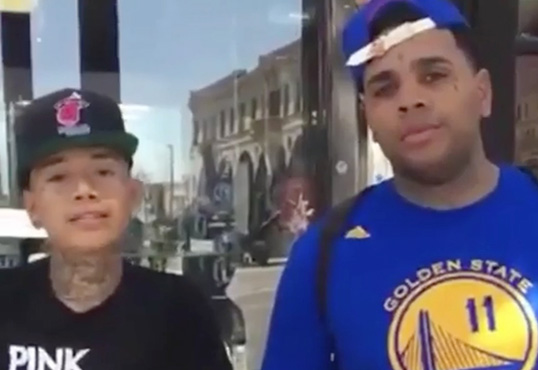 Los Angeles, CA – Rapper Kevin Gates was just trying to do some shopping on Hollywood Boulevard in Los Angeles, when he accidentally distracted some kid recording himself saying “SWAG SWAG SWAG,” who then needed to pose with the Murder For Hire 2 rapper so all the Internet could see.

“I’m really out here with Kevin Gates man. This is my boy right here bruh,” the kid says, while standing next to Gates, who looks thoroughly unimpressed and is clearly not his boy.

The two stand together for several seconds, looking like diametric opposites of the enthusiasm scale, before Gates walks off to get on with the rest of his day. The fan briefly follows him down the street, repeating “He’s one of the most poppin rappers bruh!”

Good on Gates for not kicking him, although it’s likely that no one would’ve blamed him if he had.

Check out the video, which has been making the rounds on social media this week.

Bruh.. #kevingates ain't with the flexing ??

if kevin gates ignored you and walked away from you being a fan why would u even post it ?

Dawg that Kevin Gates video in LA is priceless. I'd walk away just like that.

I think I can look at that Kevin gates video all day, that shit is so funny fr mane! Gates do not like that fake shit ???

Kevin gates looking like he was thinking "I would slap the shit out this lil boy" ???