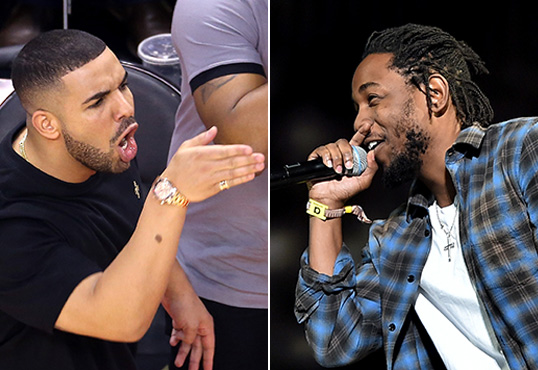 In his controversial “Control” verse, Kendrick Lamar called out Drake’s name in a list of 12 rappers he had love for, but was “tryna murder.”

Drake responded by calling the verse “an ambitious thought” in a 2013 interview, but said he didn’t feel like Lamar was outdo-ing him in any way at that time.

Since then fans have been trying to decode lyrics from both artists looking for subliminal shots as no direct call-out was released from either party.

Lamar has said previously that the song didn’t impact his relationship with The 6ix God, and recently uploaded a clip of himself singing along to the rap superstar’s “Controlla.”

But former NFL player/current radio host Marcellus Wiley says he witnessed first-hand one of the two rappers take a clear shot at the other in an interview that was shelved at the request of the rapper’s team.

“I can’t say what I wanna say, but I’m gonna say it anyways because my contract is up and this might give me more money,” Wiley said on an episode of Max & Marcellus on ESPN radio this week. “All I know is there was a beef, and all I know is I was witness to when the beef would have ignited to proportions we have not seen since Ja Rule/50, maybe even Ice Cube/N.W.A. Like it went there. But that was destroyed from everyone’s property. That was destroyed, that interview, that moment was destroyed. That’s all I’m gonna say. But I was there and I heard the shots fired.”

Wiley refused to divulge which side fired the alleged shot, explaining, “It was one-sided, and the other side was about to retaliate if that would’ve got out, but they destroyed the evidence. And I ain’t lying.”

Check out the discussion around the 19-minute mark of the episode.

Wiley also recently spoke to HipHopDX about how he almost got a beatdown from Suge Knight at a club. Read that story here.