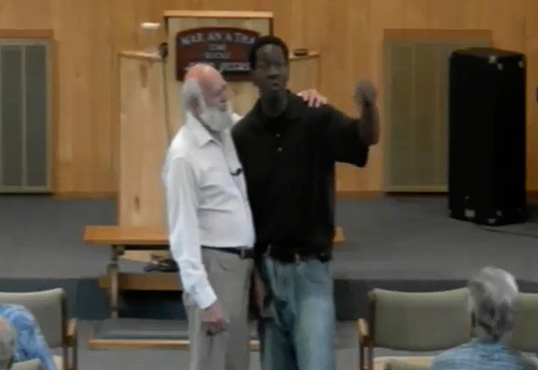 Craig Mack has risen again. Not as part of the Bad Boy reunion that’s currently making news, but rapping about religion to a congregation in a new video from The Overcomer Ministry.

In the clip recorded at a service on May 21 in Walterboro, S.C., the former Bad Boy rapper appears with the group’s spiritual leader Ralph Gordon Stair.

“You’d be surprised how many people in the underworld know about Craig Mack,” the pastor says. “When he showed up here I didn’t pay him no respect at all. Then when they told me he had money I showed him less respect. Now I see he got faith I’m giving him all respect.”

Mack makes a series of “Amens” as Stair speaks, before then rapping a verse a cappella to the congregation. An on-beat version of the song appears at the end of the video.

The opening lines to the verse show Mack’s continuing faith.

“Well I know to the world, the rap I kick will make you think I’m a lunatic, lost my mind or mentally sick / But for all mankind this is it, new kingdom on the earth where the devil don’t fit / No more bad times and no more wars, New Jerusalem the city with the gold on the floors,” he raps.

After years away from the spotlight, the MC who rose to prominence in 1994 with “Flava In Ya Ear” and its all-star remix popped up in the news again in 2013, denouncing his former ways to the same congregation, describing them as “wickedness.”

In the most recent sermon, Stair preaches about Mack’s conversion.

The Overcomer Ministry is a small farm community mostly removed from the rest of the world, aside from the sermons that Stair broadcasts through the radio and online, where he preaches that Jesus’ return is imminent and that we are “the last generation.”

About 70 people live in the community, sustaining themselves through farming, explains the group’s website. It also outlines a communal way of living for its members. “All have given all their worldly good and monies to the Lord, large or small, and no one owes anyone anything but to love and no one owns anything,” the website states.

Stair and his ministry have gone through several controversial legal debacles throughout the years, and have been investigated by authorities multiple times, reported Charleston’s Post And Courier in 2007. In 2002, Stair was arrested for his interactions with two female members of the community and spent 77 days in prison on a reduced charge of assault and battery.