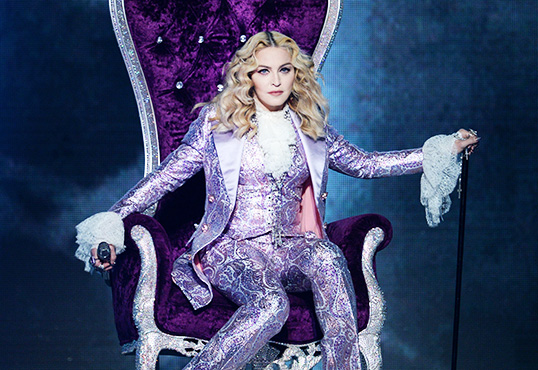 Madonna Gets Dragged By Twitter, Defended By Questlove For Prince Tribute

Las Vegas, NV – Madonna took to the stage at the 2016 Billboard Music Awards last night (May 22) for a tribute to Prince, singing a version of “Nothing Compares 2 U.” It would seem that many Prince fans would agree with the sentiment of the song when it comes to Madonna channeling the late singer’s performance.

The 57-year-old pop star also teamed up with Stevie Wonder to cover “Purple Rain,” ending the awards ceremony with the crowd inside Las Vegas’ T-Mobile Arena singing along and waving purple lights. She closed by thanking “Prince Rogers Nelson” for everything.

As two of the biggest pop stars of the last 30 years, Prince and Madonna’s paths crossed many times. They dated briefly in 1985, had on-and-off again public spats, and collaborated on “Love Song” for her 1989 album Like A Prayer.

Even before the awards, some Prince devotees were against her performing the tribute, with a petition on Change.org amassing almost 9,000 signatures.

During and after the performance, many critics on Twitter went in.

Prince's ashes bout to reanimate like MJ in the Remember the Time video.

Wonder what @Prince thought about @Madonna tribute at the #BBMAs ? pic.twitter.com/EtRc4MLT86

#Prince hearing #Madonna'svoice from heaven on the #BBMAs #IJS pic.twitter.com/lQ0Q82KZoy

Why did they pick Madonna for this again? #BBMAs pic.twitter.com/kDFdtKvgEB

Even BET threw shade at the performance, while promoting its own tribute to The Purple One at the upcoming June 26 BET Awards, with a video that said, “Yeah, we saw that. Don’t worry. We Got You.” The post has more than 10,000 retweets.

Not everyone hated it though. Many fans praised the performance for its emotional rawness and credited Madonna for keeping the tribute centered around Prince and not Madonna herself.

His Purple Heart was there in spirit. Long may He Reign! ?☔️? pic.twitter.com/o8fb8Cq6Fh

The Roots’ Questlove was one of the more prominent voices defending Madonna, and he also introduced the tribute with a touching speech and a moment of silence.

“On April 21st, we lost Prince. I say ‘we,’ because it affects us all, and no matter what kind of music we make, no matter how long we have made it, no matter our race, our color, our creed, our sexual orientation, all of us live in the land of music. And his departure from it was an earthquake,” Questlove said. “But his departure leaves behind so much work still to do. And we can follow the trails he blazed. We can follow his example. We can be fierce. We can be uncompromising. We can be experimental. We can also listen to all of those songs that he left for us. He was very, very generous in that regard. And as we move forward, we will encounter, every single day, more reasons to remember him.”

because of P's well known love for the *poof* vanishing act. A lot of us are left feeling incomplete in the act of saying goodbye.

For starters it's hard to accept him no longer being here. & in the upcoming award season for '17 there will be a gang of tributes

—w the fact that Prince–(an on the surface) face of health & invincible agelessness subcomb to something so….friggin basic

So w mourning will come sadness & anger. 1st week I cried. 2nd week I tried to atone for his sins w gettin 8-10 hrs of sleep he didn't get

Every Prince rendition will not be a life changing orgasmic xperience. Just to SING his work is brave enough. Again feeling are on high

And EVERYBODY wants and deserves a chance to say goodbye in their own way. But remember: there will be AMAs, SoulTrain, NAACP, mtv, GRAMMYS

And a gazillion other tributes. But the point is let's not get ugly w playing the "Prince would and wouldn't approve" game.

It's hard editing and ranting and running in airport. I didn't realize my gate bout to close. Don't wanna get fired in the name of Prince

….& this isn't *just about* the Madge/Stevie tribute btw

I've been gettin earfuls from in/outside the Purple Circle concerning inclu/exclusions of his estate/work/memorials/tributes who in who not.