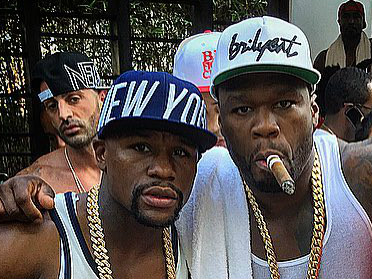 Floyd Mayweather left the boxing ring in September with a 49-0 record after beating Andre Berto for the final bout of his career.

Since his retirement, speculation has swirled about if the world champion will return. 50 Cent, a longtime friend of Money May’s says that he will get back in the ring.

“Every fighter says he’s going to retire,” he says to Vanity Fair, “what’s left when you fight the biggest, most highly anticipated fight? But I do think he’ll fight again.”

The G-Unit General describes Mayweather as his “little brother” and says their public feuds are nothing that has created a permanent rift.

“Floyd and I are really good friends, but we argue like regular people argue,” he says. “The difference is when we have disputes, it winds up on CNN or Instagram. I can cuss him out, call him names, say whatever I want to him, but he’s my little brother.”

Elsewhere in the interview, 50 Cent discusses the success of the STARZ show Power, which he executive produces and appears in. He addresses its significance as art created by Black filmmakers and why it has garnered widespread popularity, unlike his 2005 film Get Rich or Die Tryin’. He contrasts the movie, which shares the same name of his debut album, against Eminem’s 8 Mile and says race was a key factor in the national perspective of both films.

“[Eminem’s] 8 Mile was a movie about the Hip Hop world and it opened in about 3,000 theaters,” he says. “But Get Rich or Die Tryin’ [the semi-autobiographical film that marked 50 Cent’s acting debut] cost $36 million. They gave me, [director] Jim Sheridan, Quincy Jones did the score, and that movie was classified as a Black movie—and it opened in 1,700 theaters. I guess all we needed was a White police officer.”

50 Cent saw these trends in the movies and says he wanted to make sure that Power would reach as wide an audience as possible.

“With Power, I wanted the poster to feature Joe Sikora—Tommy [the White character]—because this show is as diverse as New York City,” he says. “When we said that New York was a character, it is literally that. My goal is to make the show bigger and bigger and have everybody watch it.”

Power‘s third season is set to begin airing in July.