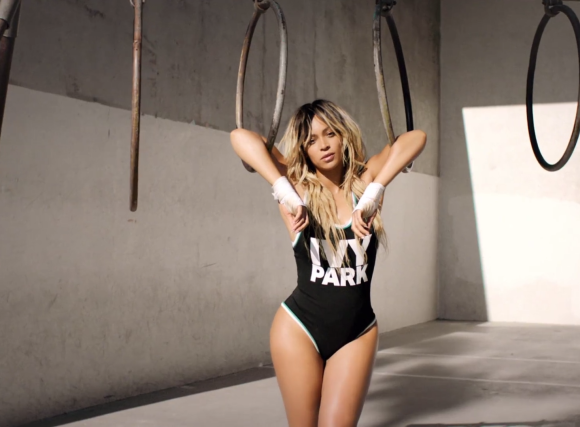 Ivy Park, named after her daughter Blue Ivy and Parkwood Park in Houston, TX, is co-founded by Bey in conjunction with London-based retailer Topshop. The 200-piece collection was launched in April at Topshop and high-end stores worldwide with pieces priced between $30-$200.

The British publication says they did an investigation that revealed that the workers at a Sri Lankan factory in the city of Katunayake reportedly are paid what is equivalent to $6.17 in USD.

They report that many of the workers are poor young women who live in a 100-room boarding house, working more than 60 hours a week. They get no benefits or vacation time.

“We don’t have our own kitchen or shower, it’s just a small bedroom,” she tells The Sun. “We have to share the shower block with the men so there isn’t much privacy. It is shocking and many of the women are very scared.”

The young woman says that she’s not able to survive on her monthly income of $235.49 as most of the money goes towards paying rent and helping out their family in a nearby village.

The factory owned by, MH Holdings, are not breaking any laws and the workers are being paid the legal minimum, according to The Sun.

“This is a form of sweat shop slavery,” Anti-Slavery International advocate Jakub Sobik says. “There are a number of elements here that tick the boxes in terms of slavery, the low pay, restriction of women’s movement at night and locking them in.

“Companies like Topshop have a duty to find out if these things are happening, and it has long been shown that ethical inspections by these companies are failing. They should be replaced by independent inspections.”

Ivy Park and Arcadia Group, the company that owns Topshop, have both responded to The Sun’s report and say that all contracted suppliers must provide “decent working conditions” for their employees and enforce a “code of conduct.”

“When customers buy our goods they have to be sure they have been made under acceptable conditions. That means without exploiting the people who make them,” a representative from Arcadia Group says.

A statement released by Ivy Park says, “Ivy Park has a rigorous ethical trading program. We are proud of our sustained efforts in terms of factory inspections and audits, and our teams worldwide work very closely with our suppliers and their factories to ensure compliance.”

Forever 21, Gap, Zara and Uniqlo among other “fast fashion” clothing brands have all been criticized for using sweatshop labor to produce cheap and stylish clothing over the years.

In 2013, Beyonce faced a similar scandal involving retailer H&M when she became the face for the brand’s high street summer swimwear collection. H&M was accused of using child labor in Bangladesh, India factories.

It is plausible that the Lemonade singer, who is currently headlining her Formation World Tour, is unaware of the logistics concerning the conditions in which her garments are made.