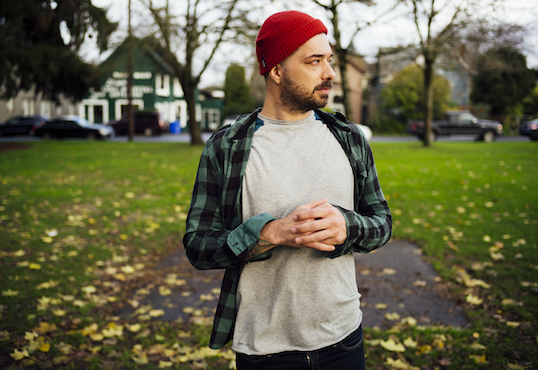 Aesop Rock is probably the most respected known unknown within Hip Hop. His status as the culture’s underground champion has allowed him to have a prolific career for damn near two decades. Since the release of his sixth solo effort Skelethon, he’s done a slew of collaborative projects with everyone from Hail Mary Mallon with Rob SOnic and DJ Big Wiz to Lice late last year with Homeboy Sandman. For 2016, he’s dropped what could potentially be one of the best albums released this year regardless of where one falls in their rap conversation. Sitting at 15 tracks, The Impossible Kid is everything fans of the Rhymesayers MC should expect from an Aesop project. Let’s not forget the gnarly Rob Shaw directed accompanying movie that’s essentially a remake of Stanley Kubrick The Shining adaptation with small toys.

Exchanging emails with HipHopDX, Aesop explains the meaning behind The Impossible Kid, his relationship with Rhymesayers and the collaborative projects.

“They are one of the few labels I have a relationship with, and when I needed a home they [Rhymesayers] were there for me” — Aesop Rock on being down with veteran record label.

HipHopDX: Rhymesayers turned 20-years-young last year. What attracted you to the label and from your perspective, how has the label been able to last so long in the Hip Hop space?

Aesop Rock: They are one of the few labels I have a relationship with, and when I needed a home they were there for me. A long time ago they figured out a business model that works for them, and in many ways they seem to exist on their own plane. I’m not a businessman, so I’m not really sure what keeps it going for them behind the scenes – but they certainly have managed to develop a fanbase beyond what the individual artists will bring to the table. There are “Rhymesayers fans” which is interesting to think about.

DX: Where does the title and inspiration for the cover art come from?

Aesop Rock: The song “Get Out of the Car” was originally called The Impossible Kid. I just kinda came up with the term and used it in a rhyme, but the phrase felt larger than the song for me and it ended up as the album title. I think it just means someone who is difficult to get, or has a difficult time. I feel kinda displaced these days and wrote some of this record in the mind state of wanting to “escape.” I was able to play the songs and tell Alex Pardee my ideas, and he translated it all into a pretty grand visual. I’m lucky that he tends to take this stuff as seriously as I take the music. A lot of the time the artwork gets done at the end of the process, but you don’t want it to feel like an afterthought. It’s gotta elevate the whole thing. People will see that before they hear a note I’ve worked on.

DX: It’s been four years since your last project. In the age where artist manage to pour out content constantly, where does your ability to maintain fandom without resorting to that come from outside of collaborative projects?

Aesop Rock: It’s only been four years since my last solo project. I had full lengths with with two groups I’m in in both 2013 and 2014, and instrumental tape in 2014, and a collaborative EP in 2015. These solo endeavors just take a lot of time and energy for me. I want them to be something special, and the key is to not rush it. I do these collab albums and keep my creativity going, but the whole time I privately work on my solo stuff. Ultimately they’re ready when they want to be. As for the fandom – I really don’t know. I’ve never come to the table expecting people to still be there – in fact I think I expect failure. So the fact that people are still here is a bit of a mystery to me.

“I feel kinda displaced these days and wrote some of this record in the mind state of wanting to ‘escape.'”

DX: Should we expect more collaborative projects in the future?

Aesop Rock: I’d imagine so. I don’t like announcing things before they’re really ready because all too often people announce projects that never come to fruition. But yes, I’m certainly working on a few things.

DX: One of my favorite early projects from this year was Onry’s “Duo” project which features the opening track “NINETEEN.” What’s it like to see other artists from the Rhymesayers mold come into their own?

Aesop Rock: It’s great – Onry has always had his thing going on both pre and post his time on RSE. He’s a great dude and he grinds harder than anyone. Love seeing him get shine.

DX: You recorded the album at a barn outside of the city. How did that experience shape the early parts of the album?

Aesop Rock: I would say I wrote the foundation there – but ultimately recorded it all back in a city environment. I think some of the themes of escape and reflection were really swirling around me at that time. I didn’t need a city to give me ideas, I had things inside me that needed to get out – and that served as a great place to allow that to happen. Ultimately I just change up my scenery sometimes and when i’m feeling stuck I migrate.

DX: What inspired the “Get Out of the Car” track?

Aesop Rock: I was just thinking about my friend Camu who died of cancer in 2008. I felt like I could count a large episode of adversity that occurred once every year from then until now, and I started wondering if maybe I never climbed out of the individual hole. Sometimes you think you take your time to heal and move on, but one day you realize you’ve been in a funk for going on a decade. I think I was just taking a new angle on some of the stuff I’ve been through in the last while.

DX: Is there a track you could say was the most exciting to pull off?

Aesop Rock: Hmmm. When I make this stuff it all can kinda blur together, so I don’t know that one feels more exciting than the rest. I remember when I wrote “TUFF.” I thought it was decent – and it sat around in demo form for a long time. Then I got around to re-laying the vocals and the whole thing kinda jumped to life for me. When I make demos, half the time I’m like rapping into a laptop while laying around on a couch or something. I’m writing and patching lyrics together and laying little phrases and parts – then it just sits around. When I have enough songs I go back and do a real vocal take in the booth – and it’s often at that moment when the song can pass or fail. Sometimes it’s hard to recapture the original vibe, but other times the songs really take on a whole new shape in that phase, for better or worse.

Aesop Rock’s The Impossible Kid is currently available digitally on iTunes and physically at Fifth Element.