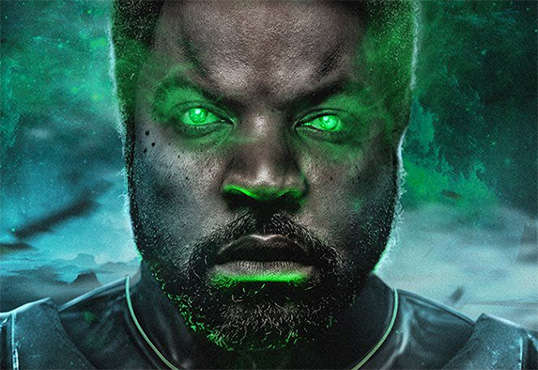 Now that Ryan Reynolds has traded in his magic ring for an extended armory of guns, knives and curse words, hopping from his role in DC’s 2011 flop Green Lantern to Marvel’s 2016 hit Deadpool, the role of the inter-galactic protector is up for grabs.

Clerks filmmaker and occasional comic book writer Kevin Smith retweeted some fan art of Ice Cube in the role, saying he loved the idea, and referenced a line the rapper-turned-actor delivers in John Singleton’s 1991 classic Boyz N The Hood.

DC and Warner Bros. have announced a reboot of the franchise set for release in 2020. Their previous attempt was considered a flop financially and was thrashed by critics, netting a score of 26% on review aggregator Rotten Tomatoes. Previously, singer and Fast & Furious actor Tyrese Gibson was rumored to be in contention for the updated role.

The John Stewart version of the character was one of DC Comics’ first black superheroes, appearing in 1971.

Ice Cube hasn’t commented on the idea publicly, but recently told Complex News that, if given the choice, the comic book character he’d want to play is The Incredible Hulk.

Many tweeting me today about @ThatKevinSmith wanting some @icecube #Greenlanterncorps pic.twitter.com/gO7LFV9Itp

Comic fans were split on the suggested casting.

LMAOO! Ice Cube as Green Lantern and you could as well cast Young Thug as Martian Man Hunter. Stay away from the weed

Could u imagine ice cube interrogating a bad guy as green lantern sayin "what he say!?" In craig from Friday voice

There are some really idiotic comments and then there is Kevin Smith saying that Ice Cube would be an amazing Green Lantern.

Ice Cube as the new Green Lantern. That might be worth seeing. ????