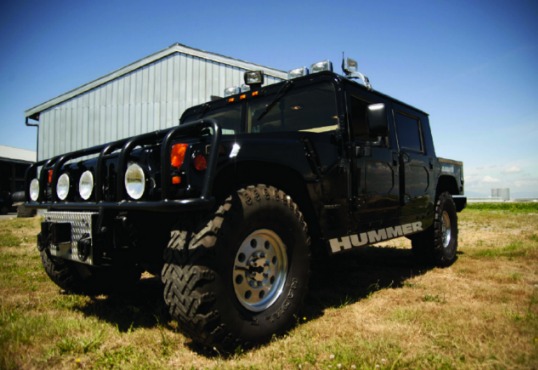 Boston, MA – One of the biggest pieces of Tupac memorabilia is currently on the auction block, just as the late rap legend’s 20th anniversary of his death is approaching.

Boston-based RR Auction is currently in the process of selling the spacious automobile that not only comes with hoards of features but also invaluable collectibles owned by Makaveli himself. He purchased the whip on August 16, 1996, just under a month before he died in Las Vegas and the odometer only reads 10,101 miles. The Hummer has made its rounds without actually touching the road; having been won in a 2003 raffle organized by BET’s ‘Picture Me Rollin’’ sweepstakes, before later being bought back in 2007 by Havenotz Entertainment owners Sardar ‘Candyman 187’ Khan and Yaasmyn Fula, the latter being the mother of slain Outlawz member, Yaki Khadefi.

Pac customized the the fully loaded Hummer H1 vehicle himself, equipping it with a 6.5 liter, turbo diesel V-8 engine with automatic transmission, 38″ Dick Cepek off-road lights, a 360-degree spotlight, a grille guard, diamond-plate bumpers, GC Package oversized off-road wheels and tires, and an external PA system with three sirens; area over rear driver side fender bears white lettering, “Eliminator.” On the interior, burl wood with beige leather permeates the upholstery, and additional features include a 12-disc Clarion sound system, Sony GPS, a central tire inflation system, air conditioning, rear sliding glass window, privacy glass, full power options, and a 12,000-pound winch. Had Tupac been around for the streaming and digital sound era, who knows what we could be picture him rollin’ in.

Promotional copies on cassette of Michael Jackson’s Thriller and 2Pac’s All Eyez on Me are also included with purchase of the vehicle but perhaps the most interesting souvenir is the custom license plate, which reads “YAKNPAK,” honoring both Pac and the aforementioned Khadefi. The 19-year-old burgeoning rapper was found dead with a gunshot to the head two months after Tupac’s murder on November 10, 1996, in New Jersey. It’s being stated that he and Tupac were spotted in the Hummer driving throughout Los Angeles on numerous occasions, mostly following studio sessions.

Research on the vehicle reveals the Hummer is the last vehicle the rap star ever purchased before his death on September 13, 1996. His mother, Afeni Shakur, is listed as the property successor.

Photos of the Hummer and license plate can be seen below.