Rebel Diaz Double Down On Taking Ted Cruz To Task 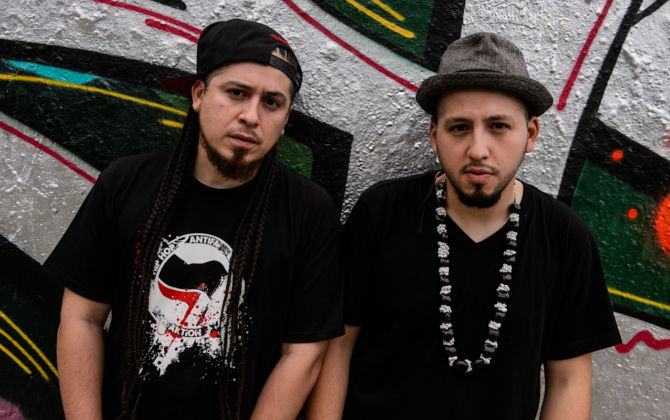 Bronx, NY – Hip Hop’s most important story this week is unquestionably Rebel Diaz’ disruption of presidential candidate Senator Ted Cruz’ meeting with Bronx ministers, hosted by New York State (D) Sen. Ruben Diaz, Sr. Rap group and founders of the Rebel Diaz Art Collective, brothers RodStarz (Rodrigo Venegas) and G1 (Gonzalo Venegas) intended to ask policy questions prevalent to the South Bronx community—one with a robust immigrant population that also doubles as one of America’s poorest congressional districts—for their web show N Don’t Stop on Telesur. When Sen. Diaz rudely and repeatedly dismissed the RodStarz, stating “Why are you here? Who invited you here? Get out of here, please,” they refused to relent. When Senator Cruz brushed off the Bronx resident’s question about his position on immigration with “We’re a country of immigrants, sir,” they boldly reiterated throughout the meeting, before being removed by the NYPD.

“We live in Hunt’s Point in the South Bronx,” RodStarz tells HipHopDX exclusively. “We’ve dealt with the father and the son. Senator Diaz is the same dude that was asking for stop-and-frisk in the Bronx. He’s super homophobic. He’s an immigrant himself but he’s also down with the Republican party, yet he’s a Democrat. We’ve dealt with them. We’ve never dealt with Senator Cruz.”

While a gaggle of media members were on-hand for the latest example of, as G1 describes “electoral theater,” oddly the story became more about Rebel Diaz’ action rather than Ted Cruz’ policy agenda. Every major outlet from MSNBC to Reuters reported on RodStarz and G1’s action, many deriding it as “heckling.” It was a weird inversion that highlighted an inefficiency in the fiduciary responsibility of the media and our political process. HipHopDX spoke with both RodStarz and G1 about their efforts that day and going forward.

HipHopDX: I’ve been trying to figure out the appeal of Senator Ted Cruz over Donald Trump. Cruz seems to have a similar policy agenda as Trump. From your view, why do you think establishment Republicans would support Cruz over Trump?

G1: We think that in general that there’s a crisis in the ruling class in the United States. You see it within the Democratic party and the Republican party. Just the fact that we only talk about those two parties is something that should make us take pause. In most other countries you have multitudes of political parties engaging in the electoral political process. Here in the United States for 150 years we’ve had a two party dictatorship. I think that aspect of things is not talked about enough.

Trump and Sanders on two different extremes are speaking to those populist issues that are the issues that most of America is facing, in terms of housing crisis, schools and bridges that are crumbling. We’ve been asked, “Are you anti-Cruz? Anti-Trump? Who do you support?” For us, we believe in people power. It’s not a way to avoid a question. But the reality is that the electoral process every four years is a charade. We know that a lot of it is theater. We know how much money controls this process. We know the undemocratic aspect of superdelegates and Electoral College and SuperPac money. At some point if you look at it at a very objective, scientific way, it’s a charade that is in a lot of ways illegitimate.

For us, the energy is beyond calling these dudes out. It’s building power in our community independently of all these politicians. Today we were at our community center building with a group of students who came by to learn about our community gardens. There’s issues of food stamp availability. One of the big takeaways we’ve had over this Cruz thing is that these people aren’t speaking to the issues that we’re dealing with: Housing, schools, living in a food desert. It’s a narrative that we need to reclaim in terms of how we’re political in our everyday life.

DX: From your point-of-view, how would describe his district and his supporters?

RodStarz: Senator Diaz is a reverend. Yesterday’s meeting, to be clear, was Senator Diaz and a bunch of Evangelical ministers. The majority of them are Dominican, Puerto Rican. He has a big strength in the churches. He parades around in his cowboy hat giving away free food. That’s how he got his political strength. He’s also never had much competition. For a number of years and a number of elections, he’s been the only name on the Democratic and Republican ballot. He’s had zero opposition, which is a sign of the amount of power of the Diaz family and the Bronx democratic machine has. Even if you look at it from a liberal level, which is not our lens on it, when Bernie Sanders comes to the Bronx, he receives zero support from any of the Latino elected officials. Hillary Clinton has them all in her pocket—from Senator Diaz, Jr., who’s the democratic borough president and a mayoral candidate in the future who’s been mainly responsible for the gentrification going on in the Bronx. Large lots of land have been sold to attorneys who are friends of former Mayor Bloomberg for $2 [sq. foot]. If you look at the history of the political work that we’ve done from 2008 to 2013, we were in an abandoned factory in the South Bronx and turned into a Hip Hop community center. We had the Rebel Diaz Art Collective. I don’t know if you remember this story, but in 2013 we got raided by the NYPD along with federal marshals and that was all something that happened because there were real estate developers who bought the land and were building a 14-story condo. The Bronx is being gentrified because the Bronx is being sold out. The birthplace of Hip Hop has been sold out to real estate developers.

G1: Also, to qualify my statement on the illegitimacy of national elections, I think the focus on local elections is important and legitimate to engage in in terms of these local leaders who are making decisions everyday and cutting deals everyday with other corporations or other national politicians and these decisions are affecting our lives on the everyday local level.

We had an adventurous week. We rolled up on Chicago Mayor Rahm Emanuel. He happened to be on our flight coming back from Chicago. We caught him getting off the plane. We host a web show on Telesur [N Don’t Stop]. What we were doing at the spot yesterday was trying to participate in the journalism, but the fact is that the journalists aren’t asking the questions. They were just kind of happy to be in the building. That’s the vibe that you get from the journalists that are there. It’s like, wow, how are they not asking the questions? You’re in the Bronx. You don’t even support immigrants. They’re talking about building walls and all this. They’re talking about deporting Muslims in Muslim communities and no one’s asking these questions. I’m sure you saw us reporting from Ferguson and it was the same thing. There’s tear gas everywhere and they’re not reporting on it because someone’s telling them it’s not tear gas.

DX: It was an odd inversion of journalism. Watching the video, the journalists present were more interested in asking you questions than asking Senator Diaz or Presidential candidate Senator Ted Cruz. It was a weird example of misplaced priorities on behalf of the media present. You guys became the story and this was a legitimate news event.

G1: What’s crazy is that those that criticized our disruption and said that it’s not journalistic, the fact is that that disruption was the reason why the issues came to light. If it wasn’t for the disruption, the issues of climate change and how it affects communities like the South Bronx would not have come to light. It would’ve just been Ted Cruz met with some ministers in the Bronx. Again, it’s part of the electoral theater. You’ve got the cameras. Ted Cruz talked about his win in Wisconsin the night before, talked a little Spanish, blah blah blah, peace.

It’s funny that you point that out because I hadn’t thought about how the story became inverted because disruption sells and the timing with folks disrupting the Trump events and all that. Networks are getting bread. In some convoluted way, our engagement feeds into that. We was bugging yesterday. I watch cable TV all the time to keep up with the news, I’m bugging that our shit is on loop. Again, it’s a narrative created around us because issues only come to light when people who have been silenced—we’re not voiceless, a sector of our community is silenced—[are disruptive]. I think that’s the energy post-Ferguson. We’re in a different era.

G1: That aside, there’s a respectability politics that’s happening where the dudes in the suits are untouchable. If you think about it, TMZ as a media force has gone mainstream with photographers and journalists being aggressive with celebrities about their personal lives. When that type of attitude is taken towards politicians with real issues, then it’s heckling, then it’s a problem. I ain’t go to journalism school. But because I’m a Hip Hop artist that tries to speak what was going on in my community, we had access to do people’s journalism through a revolutionary network. For us, we’re just going to start pushing that way of reporting. You gonna hear us out. It’s been one week and we’ve done it to Rahm Emanuel and we’ve done it to Ted Cruz. We’re going to figure out who’s next.