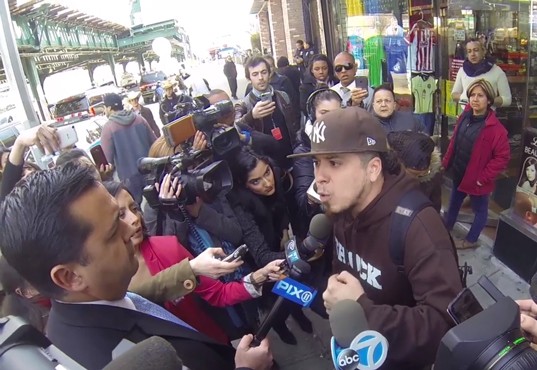 “Senator Cruz, why do you come to the Bronx, an immigrant community, with such an anti-immigrant stance,” RodStarz asked as Ted Cruz entered a restaurant in the Bronx, this week.

In response, Cruz offered a swift and vague response, stating “We’re a country of immigrants, sir.”

Prior to Cruz’s arrival, RodStarz, who was at the event as a rep for the news outlet TeleSur, also confronted Senator Ruben Diaz, Sr. on his decision to welcome Cruz to the Bronx.

Senator Diaz simply responded by asking who invited the rapper to the meeting.

Cruz’s visit to the Bronx was unsurprisingly short-lived. A visit to the Lighthouse Charter School in the New York City borough was canceled upon receiving word that students were organizing a walk-out.

Video of RodStarz confronting Ted Cruz, can be found below.