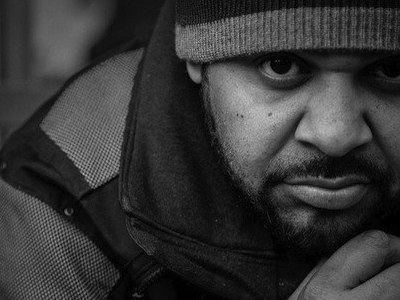 Brooklyn, NY – On That’s Hip Hop, his new project in collaboration with producer Domingo, Joell Ortiz felt the need to address his city’s Rap status on the song “Reppin N.Y.”

“New York is scattered, man, in my opinion,” the Brooklyn, New York rapper says during an exclusive interview with HipHopDX. “When you’re trying to become a Hip Hop artist or an artist in general and you don’t know the business yet, the first thing you associate success with is the radio. ‘How do I get on the radio? How do I get people to hear my music when they’re in their car?’ That’s the win. That’s worth more than money. It’s like, ‘Yo. You hear that? I’m on the radio.’

“So the kids that are coming up now in New York are tuned into the radio, just like they’ve always been,” he continues. “But what radio is playing now is not, and I’m speaking in New York, is not that traditional New York sound. They’re playing Southern records. They’re playing Trap music. They’re playing more so commercial music only and it’s transforming aspiring artists into that because when you say to yourself, ‘Yo. I want to get on the radio,’ and you turn on the radio you kind of imitate what they play because it gives you the best shot.”

The bent of commercial radio has a major affect on aspiring emcees from New York, Joell Ortiz says. In fact, the former Aftermath Entertainment recording artist says that it negatively impacts their artistic development.

“These kids, they’re not getting a fair chance in my opinion to figure out who they are,” Joell Ortiz says. “They’re becoming what they think they need to be. Radio used to be so much more diverse when I was coming up as a young kid, even in my early teens. It was spread out. It was hard stuff, R&B stuff. You could be inspired by so many different [types] music and come into your own. It’s really one-sided right now. You have New York kids rhyming with Southern accents that don’t really exist. It’s amazing to me and I understand it, so I don’t blame the kids.

“I see all these slogans to ‘Bring New York back,’” the Slaughterhouse rapper adds. “New York has never left. New York radio needs to support more New York-sounding artists. We’ve always been known for lyricism and having hard records. That’s what I do. That’s what I love to do. I can’t change that. It’s what I am. I’m not looking to change that. I stay true to myself and I stay relevant because of that because there’s always and audience that feels like, ‘Man. That’s pure. That what I came up to.’”

Joell Ortiz: “I Don’t Think Hip Hop Music Has A Color Or An Ethnicity”

Joell Ortiz addresses the various challenges he’s faced as an artist and person on “The Word,” the first track on That’s Hip Hop. One topic he brings up again is being respected in Rap circles as a Puerto Rican.

“That wall, believe it or not, it’s still there,” he says. “I recently did a feature with an artist. I won’t say who. I’m sure when he said this, it was harmless ‘cause he said it laughing, but he was like, ‘Man. You know I had to reach out to the nicest Puerto Rican.’ I was like, ‘Wow. It’s still there.’ He felt the need to reach out to me because my presence on the record will bring him to the Latin audience. I love who I am, but I don’t think Hip Hop music has a color or an ethnicity. It’s just a message and my message is pretty-much the same message as any person of any color that came up poverty-stricken and rapped their way out of it. So my whole career has been a battle. Forget about going one-on-one, face-to-face with a Battle Rapper. My career in its entirety has been a battle trying to get a record deal and get past the weight issue, get past the issue of them just seeing me as a Puerto Rican rapper. It’s been uphill.

“I just felt the need to put that at the top of this project,” Joell Ortiz adds, “because this project is called That’s Hip Hop and that’s all I ever wanted anyone to think about when they thought about me, a good Hip Hop artist.”