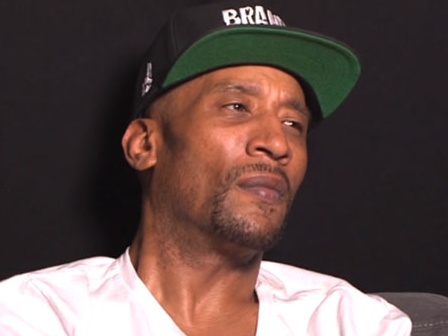 Lord Jamar says he’d be willing to work with a gay artist on a song as long as they aren’t looking to “promote” their lifestyle.

During a discussion with Vlad TV about Danny Boy, the former Death Row artist who recently came out as gay, Lord Jamar was asked if he’d ever record with a gay artist. The Brand Nubian lyricist responded by stating that he likely already has.

He added that he wouldn’t have a problem with it as long as it’s not a “pro-bullshit song.”

“Listen, I’m sure I probably already have…Not that I’m gonna go out of my way to make some shit with a gay dude,” Lord Jamar said. “But I’m not above creating some sort of piece of art with somebody who has a different sexual preference. But what we’re not gonna do in that song is promote any of that bullshit.”

Prior to being asked if he would work with a gay artist, Lord Jamar spoke directly on Danny Boy, and revealed that he did respect the “I Ain’t Mad At Cha” singer for questioning his sexuality following his reveal.

“What I did like about the little shit that I saw with him is that he actually seems like he regrets his choice to be a homosexual…I bet you do wish that,” he said. “I bet you do. Hey, you did it. You wanna come back home and admit you had a psychological slip. Temporary insanity or some shit…I didn’t know much of him anyway. He was a real third-class citizen at Death Row, as far as I’m concerned. The real singer is Nate Dogg. Nate Dogg wasn’t gay. That’s the one I fucks with.”

In a past interview with Vlad TV, which quickly gained notoriety, Lord Jamar criticized fellow artist, Macklemore for pushing what he felt was a gay agenda, in Hip Hop.

Video of Lord Jamar speaking on working with gay artists, can be found below.