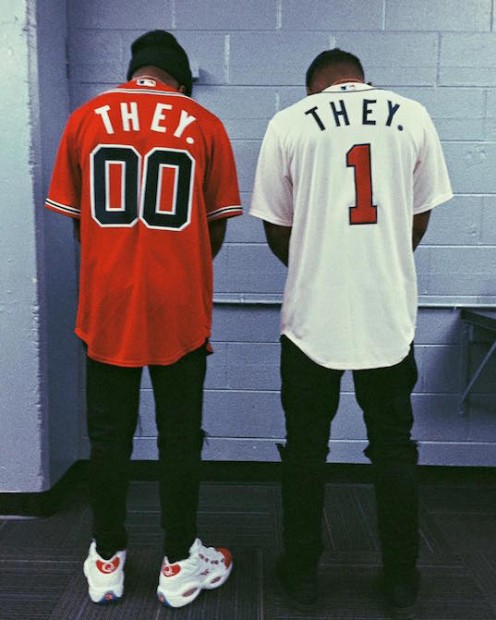 Las Vegas, NV – The mystique that surrounds THEY. would be otherwise career-threatening if their SoundCloud didn’t pack enough flames to burn down a small village. The undeniably talented duo of Dante and Drew Love, who used their musicianship to propel themselves off their L.A. couch onto Bryson Tiller’s Trapsoul Tour bill, recently checked in with mydiveo LIVE on MyxTV to explain, well…how they came become THEY.

“The name THEY. has grown to signify something but it’s actually funny because it’s came about in like an unorthodox way,” Drew explained. “We were just in the studio and the session file for ‘Back It Up’ was named ‘they’ and we were like, ‘Oh that’s a kind of like, a cool name–what if we named our group that until we think of something better?,'” he recalled. “And we didn’t think of anything better and that’s why were are THEY. I don’t know if you guys wanted a better story than that but that’s how it happened.”

The happenstance recording session would eventually go on to birth the Nü Religion EP; a three-track offering where each song has nearly amassed one million plays on its own (lead-off single “Back It Up” is actually sitting at 1.7 million). After signing with Mind Of A Genius’ rock-solid conglomerate, their paths crossed with Bryson Tiller’s just as his debut album began to break Snapchat and going on the road together was simply an easy decision.

“When the opportunity came out for us to go on tour, it just seemed like a natural fit. He’s up-and-coming, we’re up-and-coming, so we just combined forces and and it worked out really well,” Dante said.

Since kicking off last month in Portland, OR, the Trapsoul Tour has been privy to many sold out shows across the country. The Los Angeles stint at The Wiltern brought out tremendous star power as Rihanna, Puff Daddy, French Montana, Travis Scott, Kylie Jenner and many more turned out to breathe in the performance.

The interview is taken from the latest episode “Words In Motion” segement of mydiveo LIVE, choreographed by Victor Gonzalez and featuring a group he put together from the Get Down District. The show airs on MyxTV on Mondays at 10PM EST/7PM PST.