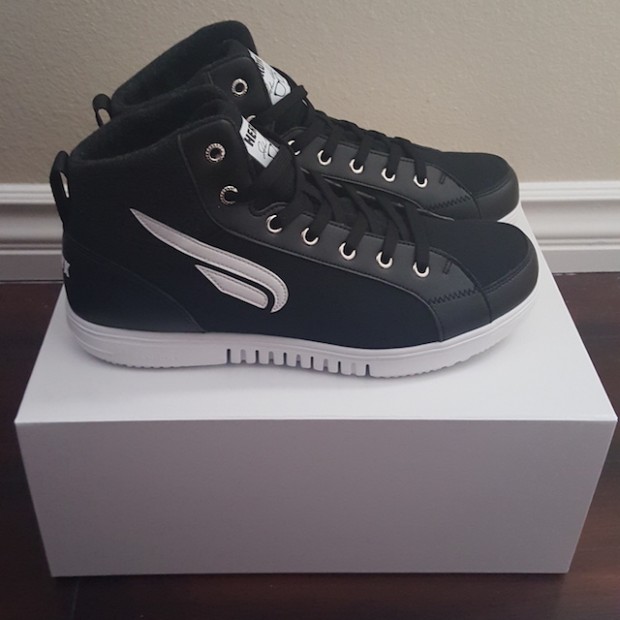 Shoe Company Heroyk Aligns Itself With Rap For Launch

Its first shoe, which was created in exclusive partnership with the Coach Wooden Estate and IMG, was released this month and pays homage to John Wooden, the Basketball Hall Of Fame player and coach who led the UCLA basketball team to 10 NCAA championships in a 12-year span.

The “Wizard of Westwood,” as he was known, was famous for his quotes, life lessons and sayings. Heroyk wanted to tie basketball, poetry and music together to launch its brand.

“We love music,” Heroyk CEO Thor Roner says during an exclusive interview with HipHopDX. “It’s a fabric that connects us all. It’s an important part of our brand. And Hip Hop is the indisputable soundtrack of basketball.”

In order to incorporate rap into its product launch, Heroyk reached out to a number of independent acts, including Fearce Vill, to kick off a 29-day tribute to Wooden’s coaching career by releasing exclusive Rap songs and music videos; holding a poetry-inspired Hip Hop contest; and conducting a fundraiser to support under-educated children in the US.

“To help launch the Coach Wooden Hip Hop tribute, we wanted to work with talented underground artists, the people working hard on their craft,” Roner says. “They grind and push with the faith that things will turn out. They trust the process. And I think Fearce Vill is a great example of this. He embodies the spirit of what Coach Wooden was all about.”

Roner heard some of Fearce Vill’s material and reached out to him. The rapper, one-third of Seattle Rap group Dyme Def, sports a Heroyk shirt in the video for his “Wooden Heart” song.

“I liked the spirit of it all,” Fearce Vill says of Heroyk during an exclusive interview with HipHopDX. The rapper is not sponsored by or a brand ambassador for the company.

“And the sneakers are super dope,” Fearce Vill continues. “There aren’t many people like Thor and his team courageous enough to attack the almighty Nike. It’s a Herculean task. But they’ve done it well. It reminds me of the struggle you go through as an artist trying to find your way in the music industry.”

In addition to its Rap angle, Heroyk says on its website that 5 percent of profits from the Coach Wooden sneaker helps educate underprivileged kids in America, a cause the Coach championed throughout his life.

Roner says that Wooden’s lessons, which have been the basis for several books, remain relevant today, especially when paired with Rap.

“Our idea was to use the medium as a way to introduce his teachings to new generations,” he says. “The beat is poetic meter rendered audible. It has always been an aspirational art form that was born from a group of kids that wanted to create a culture to express themselves. The original values of Hip Hop were inclusion, recognition, creativity and transformation – all aspirational values Heroyk and Coach Wooden stand for.”