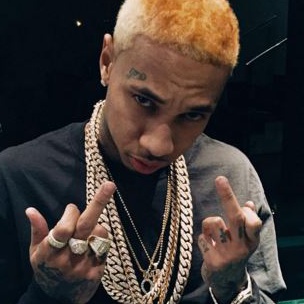 Tyga says Kanye West is “the Farrakhan of rap,” during 92.3 LA interview.

During a recent radio interview, Tyga spoke on fellow artist Kanye West when asked if the rapper has contributed to his newest project, Rawwest Nigga Alive. He explained that Kanye didn’t contribute to the album, but he has worked with ‘Ye on WAVES.

Tyga also referred to Kanye as “the leader” of rap music, and applauded the musician for reaching out to the younger generation of artists.

“Nah, he didn’t work or do anything on this album,” Tyga said. “But he did—We actually been working on a few joints. He working on this joint that I got with him, that’s crazy. And then I was working with him on his album. He got some crazy stuff. He played some joints the other day. He got some monsters. He’s the God of this. He’s like the Farrakhan of rap for everybody. He’s just the leader of this. And then he really reaches out and incorporates the younger generation. And gets everybody involved. And that’s what I like. He ain’t tryna put artists against other artists. He’ll do a song with Drake. He’ll do a song with whoever. Because he want everybody to work together.”

When asked if there was any tension at the Kardashian Christmas party last year because of the presence of Drake, an artist Tyga feuded publicly with months ago, he revealed that the two are now on good terms.

He explained that a lack of communication is what caused their falling out. The Los Angeles rapper then revealed that Kanye is the one who helped in ending their feud with one another.

“Nah, it ain’t no tension,” he said. “We cool. We on good terms. We just wasn’t [communicating]. I think that’s the main thing. It’s like when you got history with somebody and then you stop communicating with a person, it can go any way. And anybody can assume anything. And then it just goes from there. And you got people in your ear. I think you should always be able to communicate with people if you have history with them. And then ‘Ye he put us in a room together when he was doing his fashion show. And I didn’t even know he was there. And then we seen each other. And we gave each other a hug and we just chopped it up.”

Video of Tyga speaking on Kanye West and Drake, can be found below.