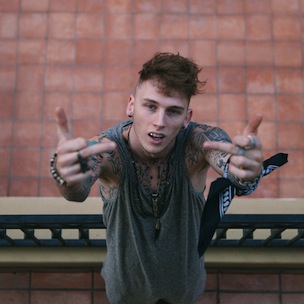 Machine Gun Kelly (MGK) was interviewed by TMZ recently and was told by the cameraman that he is one of the Top Five greatest White rappers of all time.

The Bad Boy rapper then decries Macklemore for continuing to talk about race.

“Race is not an issue,” MGK says. “Race is an issue for people like Macklemore….I’m comfortable in my own skin. I can’t help other people be the same way.”

On his recently released “White Privilege II” track, Macklemore questions himself, Miley Cyrus and Iggy Azalea for appropriation of a predominantly Black culture. The Seattle rapper said after the song was released that it was not intended as a diss, but as an exploration of self-awareness.

See the video of MGK below: