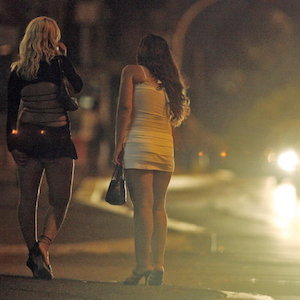 Prostitutes are seen in Rome in this July 3, 2007 photo. Italian law gives foreign prostitutes a chance to escape human traffickers who force young women from poor countries to sell their bodies to pay for their passage into Western Europe. While some other European nations also have laws to help trafficked prostitutes, Italy's legislation stands out because of its elasticity: Women are encouraged, but not required, to testify against their traffickers. (AP Photo/Andrew Medichini)

A pair of aspiring Chicago rappers have allegedly been using violence and threats to force women into prostitution under their own sex trafficking ring, according to DNA Info Chicago.

Samuel Nichols, 30, and Charles Fears, 22 face charges of engaging in sex trafficking by force and fraud and coercion, the U.S. District Attorney’s Chicago office announced. The two are known in the Chi rap world as the Hit Squad and are facing a minimum of 15 years in prison and a maximum of life if convicted.

According to law enforcement, Nichols and Fears allegedly used Backpage.com to recruit women of various ages (even minors) to engage in the commercial sex business and would set up meetings to serve clients of the website. The duo would often use threats and abuse to make the women they coerced into the ring carry out their illegal business. One incident had a woman abused so badly she needed hospitalization for recovery.

A majority of Hit Squad’s business happened in the southern and western suburbs of Chicago. They received all the money made from the sex-for-sale endeavor. Both were arrested Friday (January 15).