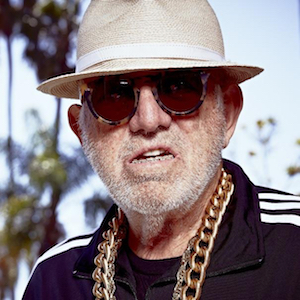 Many believe 50 is way too old to be a rapper but now the bar has been set quite high since Bitcoin entered the scene.

The 79-year-old Internet sensation released his viral “Best Bitch” video at the end of 2014 and people have been since trying to figure him out. He recently sat down with HipHopDX Senior Features Writer Ural Garrett and talked about how he became a rapper, which happened on the set of shooting a TV show.

“[The directors] said, ‘Listen, we want you to go down to the boardwalk in Venice [Beach] and we want you to do a rap song, ’cause that’ll be an episode,” he said via a segment of today’s (January 6) DX Daily. “I said, ‘You gotta be kidding! I don’t know anything about rap.’ He said, ‘Okay, well we’re going to show you.’ He played me some music on a computer, gave me a mic, and I did it.”

Bitcoin also explained what he likes to rap about and most of it seems appropriate.

“This is my medium now for what I believe in,” he said. “I do songs that are kind of strange about Alzheimer’s, glaucoma, ‘Sugar Daddy’, ‘Cafe Regret’, which is a serious song. I think about things I like to do, or see or want to be like and then I just want to do ’em and put the music to them.”