Nicki Minaj's Mother Was Not Supportive Of Meek Mill Relationship 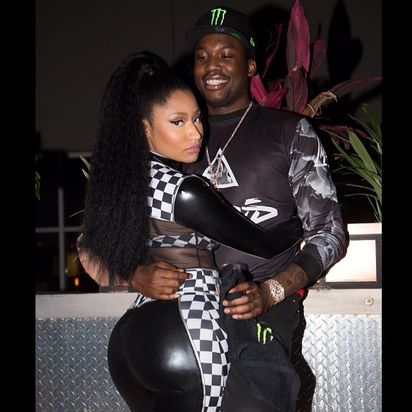 Nicki Minaj and Meek Mill have finished traveling the country together on “The Pinkprint Tour” and gave their first interview as a couple to GQ.

In the interview, Minaj details receiving the news that Meek Mill was going to jail last year and realizing she had feelings for him.

“He was on my mind the day before, because I saw him going off on Twitter, and I was like, ‘Oh man, he needs somebody to, like, make him feel good right now,'” she says. “So when I heard he went to jail, I was really disappointed. I reached out to his people like, ‘Yo, let him know I’m praying for him to come home.’ And they told him, and he asked them to call me for him. And it was like, I remember sitting on my balcony at my house and just being on the phone with him until it started getting dark outside. And I was just like, ‘Yo, I’m in trouble.’ I just knew that first day. It was that long conversation. I was like uh-oh.”

The Philadelphia rapper spent six months in jail on charges stemming from an Instagram post where he posed with a gun.

Elsewhere in the interview, Minaj says that most of her family and friends were supportive of her relationship, except for her mother and pastor.

“My mother only knows Meek from what she sees in public, in the media,” she says. “She met him now, but she just wants to make sure he’s a nice guy. She’s overprotective of her daughter. Another thing people don’t realize is I’ve only had three boyfriends in my whole life. I’ve never dated around… I don’t have a whole lot of experience in that department, so my mother and my family were very like, ‘What?’ This is a big step, because they’ve only known one thing for over a decade. Even my pastor, who’s like a second mother, was scared. Everybody was just scared. Those women were scared for me because when I love someone I really let them in, and I really let me guard down. And I think it’s only natural for a mother to just, you know, she just wanted to make sure I wasn’t rushing into anything.”

The story is scheduled to appear in the October issue of the magazine.

Read the entire interview at GQ.

Watch a preview of the photo shoot here.