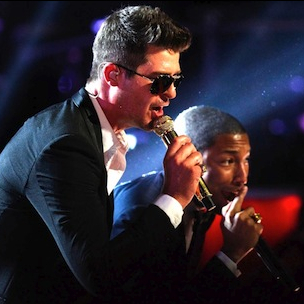 Pharrell’s and Robin Thicke’s camps have submitted a motion to the judge who heard the “Blurred Lines” copyright infringement case asking for a new trial, claiming errors and “prejudicial and irrelevant” testimonies from Thicke and musicologist Judith Finell, according to The Hollywood Reporter.

In March, a jury awarded the family of the late Marvin Gaye the money because it said that Pharrell and Thicke’s work on their 2013 hit “Blurred Lines” copied Gaye’s 1977 song “Got to Give up.”

In the newly filed motion, the counter-defendants say, “Although many of Counter-Defendants’ objections were sustained and much of Ms. Finell’s testimony was stricken after it was given, the net effect of this cumbersome process was extremely prejudicial to Counter-Defendants: (1) the jury likely concluded that Counter-Defendants were overly concerned by Ms. Finell’s testimony or were desiring to obstruct and delay the proceedings; (2) Ms. Finell was able to present to the jury testimony, demonstratives, and music that the jury never should have seen or heard; and, (3) the jury faced an impossible task of having to constantly distinguish between the select parts of what they saw and heard each day that they could consider later in reaching their verdict, and the parts they could not.”

If Pharrell’s team can’t get that, they want to reduce the $7.4 million penalty down to $680,000. They claimed that the “Got To Give It Up” sample only comprised five percent of the record, so the Gaye estate should only get five percent of the non-publishing profits.

On the flipside, Marvin Gaye’s family is now suing Universal Music Group, Interscope and others, and intends on halting the song’s distribution and seizing any work that contains it.

For more on Pharrell and Robin Thicke, watch the following DX Daily: