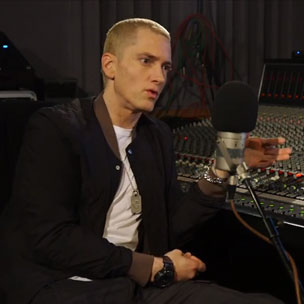 According to MLive, Eminem will not be notifying fans of a new project anytime soon.

A spokesperson for the rapper, Dennis Dennehey, e-mailed the Michigan-based media hub yesterday (January 19) to combat the claims that have been circulating the Internet.

Dennehey says the reports are “Completely untrue” and “There’s no album announcement coming.”

He has served as the rapper’s publicist for over a decade, so the validity of his statement should hold more weight for fans anxious at the idea of a new album from the rapper.

Hip-Hop Vibe initially reported that the Detroit emcee was planning to release an album titled Roots.

Without any sources, the blog went on to declare that Shady would make an official announcement during the upcoming Grammy awards and that Dr. Dre and Xzibit were also involved.

Eminem has yet to comment on the false claim but his manager, Paul Rosenberg, says Em is still visiting the studio frequently.

“He goes to the studio like most people go to the office,” Rosenberg told MLive. “So five days a week, typically Monday through Friday, he’ll be in the studio. It’s not quite nine to five — the hours tend to be quite longer — but he’s there everyday.”