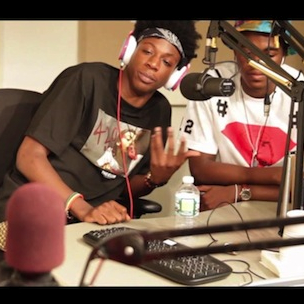 Nearly a week before the Brooklyn, New York-bred rapper is slated to release his debut album, B4.Da.$$, Joey was joined by Pro Era producer Kirk Knight and DJ Statik Selektah on the digital broadcast.

The crew spoke about the origins of the Pro Era collective and reflected on their favorite tracks.

He followed the ’90s-reminiscent offering with Summer Knights and worked alongside Pro Era to produce four additional projects: The Secc$ Tape, Peep The aPROcolypse, The Secc$ Tape 2 and The Shift.

Statik joined the gang for its Beast Coastal tour in 2013 and has produced a handful of records for both Joey and Pro Era. During the on-air segment, Statik spoke on mixing Joey’s forthcoming project.

“I was really involved with mixing Joey’s album and I’m really proud of that,” he says before playing one of its singles, “No. 99.”

Statik also shares that the album was mixed primarily in his own basement.

“My favorite song is ‘Christ Conscious‘ off the B4.Da.$$ album,” Joey says before playing the track.