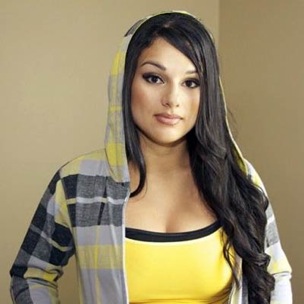 Snow Tha Product spoke with VladTV and discussed how she started rapping. She says Eminem had a big impact on her life.

“I just so happened to get into Eminem right around when I was going through a lot of stuff,” she says, “so the way that he made me feel or like Lauryn Hill or Big Pun or Missy [Elliott], the way they made me feel, like I wanted to do that.”

She explains that she wants to especially reach Latinas who Snow says don’t have anybody in the mainstream to look up to.

“I noticed that there was no Mexican chick that was rapping that I could be like, ‘Wow, I can relate to that,’” she says. “There’s a lot of stuff that goes on with being first generation Latino that nobody’s really expressing at least in the way I think it really should be expressed. So I’m kinda filling the void for now.”

The Atlantic Records rapper also says that she changed her initial stage name from Snow White to just Snow because of Disney. She expresses frustration over the company’s control over intellectual property even though the Disney movie is based on a Grimm fairy tale.

“To me, it’s like how are you gonna just steal a story or whatever I don’t know,” she says. “Probably paid like 20 pesos for it, whatever happened, and then blame people when they also want to use it? … You’re not that nice, Disney. You’re not that nice fucking Mickey.”