Yesterday (May 20), Get On Down Records released two Premium Edition versions of Non Phixion’s revered The Future Is Now album.

But where Get On Down releases typically are reissues from iconic acts whose projects went either gold or platinum (Nas’ Illmatic and GZA’s Liquid Swords among them), Non Phixion’s The Future Is Now was released independently and did not go gold.

The New York based quartet of Ill Bill, DJ Eclipse, Sabac Red and Goretex released The Future Is Now independently via Uncle Howie Records in 2002. The collection features songs recorded before and after the September 11, 2001 terrorist attacks on the United States, including “The C.I.A. Is Trying To Kill Me” and “Black Helicopters,” that discuss governmental conspiracies.

Matt Welch, Get On Down’s co-owner and co-creative director, says that releasing the Non Phixion project made sense for his company for several reasons.

“At this point in time there is definitely an interest in the late ‘90s indie scene, for instance collecting Stretch and Bobbito tapes and things like that,” Welch says during an exclusive interview with HipHopDX. “We are excited to tap into that energy as it is an era that we all hold dear in our hearts, because we were there for it. Beyond that, The Future Is Now is super solid from start to finish. We have always been fans of the group and that album.”

Get On Down’s release of The Future Is Now also marks a rare instance where the label had the full participation of the group in compiling and constructing one of its projects.

“For us it is a lot easier to deal with indie artist who owns their own content both business-wise and, more importantly, from a creative perspective,” Welch says. “We are a relatively small and efficient company and we do not have to ship a massive amount of product to be profitable. Without getting into the nitty-gritty too deeply, we can stay profitable by selling a product like this in the 1,000-2,000 unit range. Ill Bill had a treasure trove of ephemera he lent to the book, which was super helpful and added so much.  We are all really proud of the 80-page book that comes with this package and feel it is the best offering — outside of the Joe Mansfield Beat Box book from late last year — that we, as a brand, have put out thus far.”

The Future Is Now’s 2002 release date makes it one of the most recently released albums for which the company has issued a special release.

“They told us they didn’t do anything from the 2000s and up until doing The Future Is Now everything was ‘90s oriented,” Non Phixion’s DJ Eclipse says. “The Future Is Now is what they considered to be representative of the early 2000s in terms off what they think is a classic. This whole independent scene that we kind of came out of is also where Get On Down came out of. We were competing with the major labels, but on our own level. So like we didn’t go gold and platinum, but like for our genre and for our scene, it was equivalent. That album kind of stands out as the cream of crop for that scene and that era.” 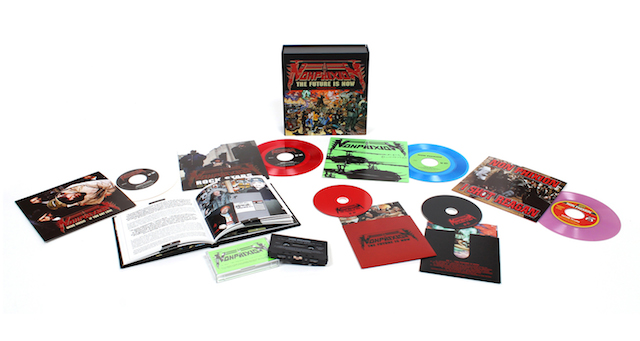