Skeme is slated to release his Ingleworld album December 17. The collection is available for pre-order on iTunes and features guests Wale, Iggy Azalea, Dom Kennedy, Nipsey Hussle and K. Roosevelt, among others.The bonus song “Thankful” is available to those who pre-ordering the album on iTunes.

In a press release, Skeme says that the album’s thoughtful subject matter made a year-end release necessary. “The music that I’m making has a serious tone to it and I think that’s the season where people are open to hearing what’s really going on,” Skeme says. “If I dropped it in the summer time, that’s when people want to have fun, drive around the city, mess with girls. I have some songs like that, but overall, it’s got a serious tone.”

Skeme is preparing for Ingleworld’s release by releasing several videos. The “Millions” video features a bank robbery storyline set in Downtown Los Angeles. Skeme filmed the clip for the Wale collaboration “Aint Perfect” in New York. A video for the Iggy Azalea-assisted “High Levels” song is set to be released in early 2014.

Ingleworld arrives after the September release of Skeme’s Bare With Me mixtape. The 21-cut collection is hosted by DJ Skee and DJ Base, and features longtime affiliates Game and TeeFlii on “Poor Money.” Other selections include “Cuban Linx” with Nipsey Hussle and “All That.”

The Ingleworld cover art and tracklisting are as follows: 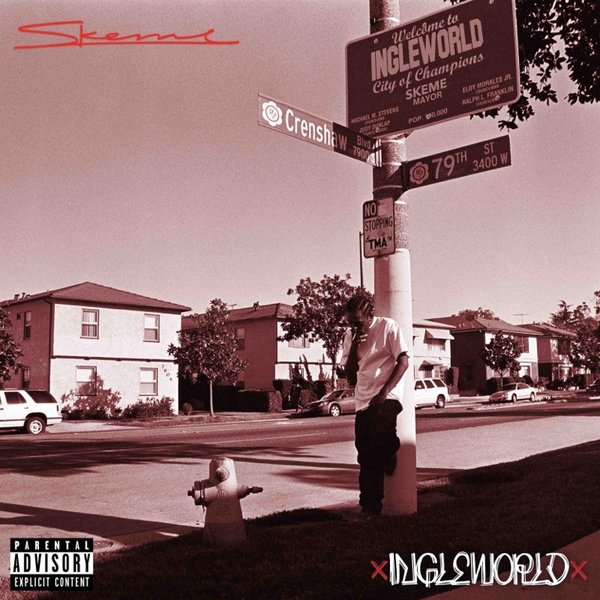 1. “We Against The World” (Produced by J Rocket)

UPDATE: Skeme has released the stream of Ingleworld via Spotify. The link is below.