Kanye West proposed to Kim Kardashian in a private event at AT&T Park in San Francisco, California, according to eonline.com.

The rapper reportedly proposed with a 15-carat diamond ring by jeweler Lorraine Schwartz.

Kanye West reportedly rented out the stadium for the evening. He invited friends and family to attend the event, as per eonline.com. West also hired a 50-piece orchestra to perform several selections, including Lana Del Rey’s “Young & Beautiful” and Keri Hilson’s “Knock You Down,” a track that also features Ne-Yo and Kanye West.

In February, Kim Kardashian spoke about potentially being married to Kanye West.

“[Marriage] is something I know that we both want in our future, but I don’t have this sense of urgency about it,” Kardashian said to Cosmopolitan. “I have this best friend who understands me and helps me through all my tough experiences, and vice versa. It just feels like this is it for me.”

During that interview, Kanye West also defended his relationship with Kardashian.

West and Kardashian have a daughter together, North West, who was born June 15.

An image taken at the event by Kris Jenner can be viewed below, via eonline.com. 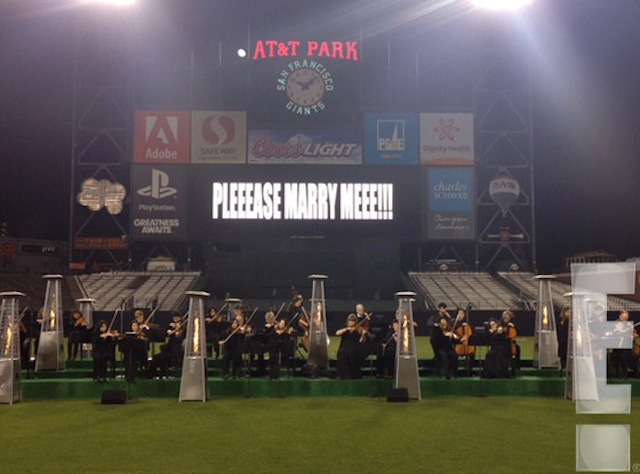 UPDATE: A video of Kanye West proposing to Kim Kardashian can be found below, via Huffington Post.

UPDATE #2: It appears the proposal is set to air on E!’s Keeping Up With The Kardashians. A teaser featuring the episode clips appears below via E!

UPDATE #3: Kanye West’s proposal to Kim Kardashian was aired on E! as part of the network’s Keeping Up With The Kardashians reality television series.

“Kim, I couldn’t be happier for you and Kanye, I’m so obsessed with you,” Kim’s sister Khloe Kardashian says in a speech to the couple. “I love you and I can’t wait to have you legally as a brother, but I still consider you as a brother now. I just cannot wait for this wedding. I’m so excited. And let’s have more kids, more babies.”

To view the full proposal episode of Keeping Up With The Kardashians, click here.