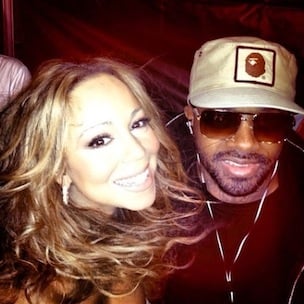 Dupri addressed his plans for the singer in a statement.

“A multi-talented artist of Mariah’s caliber should be doing everything imaginable,” Dupri said in a press release. “I’m sure others have said this but not the way I intend to do it. For me, it’s about the execution.”

Mariah Carey, who was previously managed by Randy Jackson, also released a statement regarding her relationship with Dupri.

“We have a bond that surpasses music,” Carrey said in a press release. “I am super excited about our merger because we have so many innovative ideas that I know will come to fruition.”

Carey’s upcoming album, The Art of Letting Go, has no release date. Carey has been in the studio with several artists of late, reportedly working on this album. Nas, Mike WiLL Made It and Hit-Boy are among those artists and potential guests for the release.

The Art of Letting Go is slated to be the singer’s thirteenth studio album.

“#Beautiful” was released, reportedly off this collection, and the song reached #4 in Billboard’s R&B/Hip Hop chart.

Carey has released several projects, including her 1990 self-titled debut and 2009’s Memoirs Of An Imperfect Angel. Dupri has collaborated with Carey on several songs including “It’s Like That,” “Shake It Off” and “We Belong Together,” off her 2005 album, The Emancipation of Mimi.

Dupri was also on hand for 2012’s BMI Urban Awards, where Carey was named BMI Icon. Dupri deejayed at the event and performed in honor of Carey.

UPDATE: Jermaine Dupri is no longer managing Mariah Carey, according to Billboard.

Jermaine Dupri spoke about this in a statement to the site.

“I’m a very hands-on person when it comes to my work,” Dupri said. “I put my all into every project. But when I’m not allowed to do what I do, then I know it’s time for me to move on. Mariah and I enjoy working together and will continue to make great music together in the future.”