Jay Z is set to appear on the cover of November’s issue of Vanity Fair. During his interview, the rapper details the impact that drugs have had on his life.

“I know about budgets,” Jay Z says in the magazine. “I was a drug dealer. To be in a drug deal, you need to know what you can spend, what you need to re-up. Or if you want to start some sort of barbershop or car wash—those were the businesses back then—things you can get in easily to get out of [that] life. At some point, you have to have an exit strategy, because your window is very small; you’re going to get locked up or you’re going to die.”

“Crack was everywhere,” Jay Z says in the article. “It was inescapable. There wasn’t any place you could go for isolation or a break. You go in the hallway; [there are] crackheads in the hallway. You look out in the puddles on the curbs—crack vials are littered in the side of the curbs. You could smell it in the hallways, that putrid smell; I can’t explain it, but it’s still in my mind when I think about it.”

In the article, Jay Z is asked if he felt guilt due to the impact of his dealing drugs.

While drugs surrounded him, Jay Z praises his mother for helping his family endure the struggle.

“We were living in a tough situation, but my mother managed,” Jay Z says. “She juggled. Sometimes we’d pay the light bill, sometimes we paid the phone, sometimes the gas went off. We weren’t starving—we were eating, we were OK. But it was things like you didn’t want to be embarrassed when you went to school. You didn’t want to have dirty sneakers or wear the same clothes over again.”

In the article, Jay is also asked to speak about his family. He’s specifically asked about rumors surrounding his wife Beyonce, which claim that she did not give birth to the couple’s daughter, Blue Ivy.

“I don’t even know how to answer that,” Jay Z says in the magazine. “It’s just so stupid. You know, I felt dismissive about it, but you’ve got to feel for her. I mean, we’ve got a really charmed life, so how can we complain? But when you think about it, we’re still human beings…And even in Hip Hop, all the blogs—they had a field day with it. I’m like, ‘We come from you guys, we represent you guys. Why are you perpetuating this? Why are you adding fuel to this ridiculous rumor?’”

Jay Z and Beyonce were criticized when the couple trademarked their daughter’s name. Jay Z also addresses this in the article.

“People wanted to make products based on our child’s name,” Jay says. “You don’t want anybody trying to benefit off your baby’s name. It wasn’t for us to do anything; as you see, we haven’t done anything.”

Jay also talks about his daughter’s appreciation for her parents’ work.

“She does like her mother’s music,” Jay Z says. “She watches [Beyonce’s concerts] on the computer every night. But my album came out and I don’t know if Blue ever heard any of my music prior to this album—she’s only 18 months old and I don’t play my music around the house. But this album was new, so we played it. And she loves all the songs. She plays a song and she goes, ‘More, Daddy, more…Daddy song.’ She’s my biggest fan. If no one bought the Magna Carta [album], the fact that she loves it so much, it gives me the greatest joy. And that’s not like a cliché. I’m really serious. Just to see her—‘Daddy song, more, daddy.’ She’s genuine, she’s honest, because she doesn’t know it makes me happy. She just wants to hear it.”

In the article, Jay Z also discusses his longevity and Hip Hop, saying he once thought about quitting Rap when he turned 30.

Jay Z’s cover image for the November issue of Vanity Fair can be viewed below. 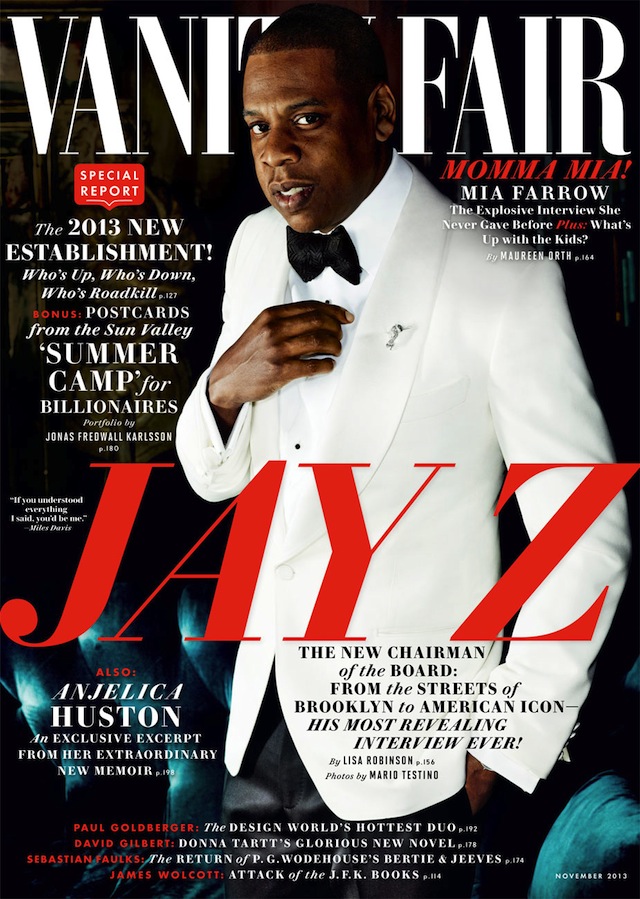