50 Cent’s SMS Promotions and DiBella Entertainment are slated to host a night of boxing September 16. “Big Apple Boxing” is scheduled to be the first card by both promoters at Resorts World Casino NYC in 50 Cent’s hometown, Jamaica, Queens, New York.

“I aim to deliver the most exciting fights possible,” 50 Cent said in a press release. “‘Big Apple Boxing’ on September 16 will bring together extraordinary talent. The action will be intense.”

The night’s other promotors, DiBella, also commented on the event and what it means to work with 50 Cent and SMS Promotions on a card that features boxers Mark Davis and Luis “Orlandito” Del Valle, among others.

“It is great to be working with 50 and SMS Promotions on this special Monday night of boxing and we’re looking forward to putting on a great card at Resorts World Casino,” said DiBella.

Aside from promoting the event through SMS Promotions, 50 is also involved as a sponsor through SMS Audio. Tickets for the event go on sale tomorrow (August 28) and are priced at $125, $85, $65 and $45, according to a press release. 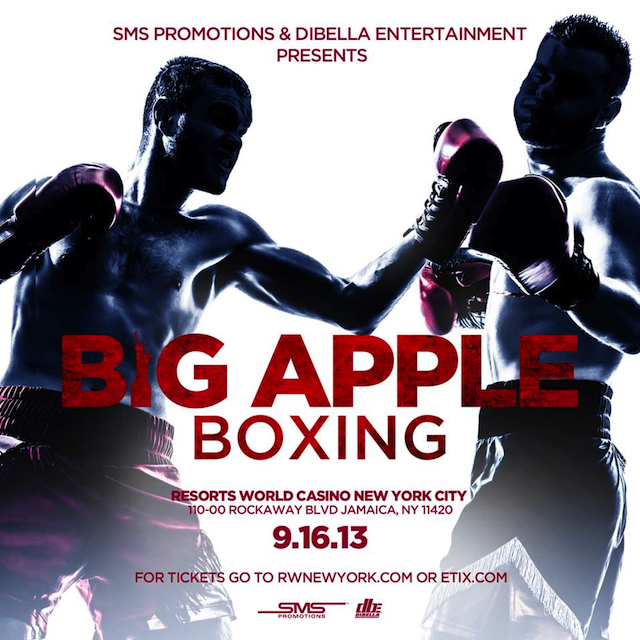 50 Cent was granted his boxing promoter license in 2012. 50 has worked with boxer Floyd Mayweather, performing at the boxer’s fights before the two had a falling out.

50 has also had ties with boxer Manny Pacquiao, who spoke about their bond. “I love music and he likes boxing also,” Pacquiao said.