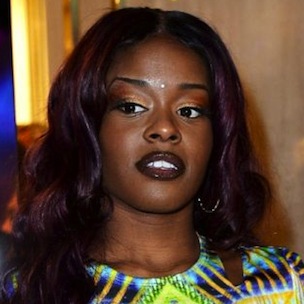 Azealia Banks and A$AP Rocky are feuding and their feud has evolved into a conversation about skin complexion and sexual orientation.

Banks was originally offended by A$AP Rocky’s comments in The Coveteur. In his interview, which has since been edited, the emcee shared his take on women wearing lipstick.

“I feel like with the red lipstick thing, it all depends on the pair of complexion,” he said, as noted on Huffington Post. “I’m just being for real. You have to be fair-skinned to get away with that. Just like if you were to wear like—fucking for instance, what do dark skin girls have that you know fair skinned girls cant do… Purple lipstick? Naw, that looks stupid on all girls! Purple lipstick, guys! Like, what the fuck…”

Banks, upset about these comments, decided to send shots at Rocky.

Some people should just come out of the closet.

Banks responded to the criticism about her “closet” comment, saying she was hurt by Rocky.

So rocky takes a direct blow to my image about dark skin and purple lipstick, then as soon as I’m a offended …. I’m the bad guy.

Especially since rocky stole my hair style from the 212 video ….. Y~’

In November of last year, Rocky shared his views on homophobia and racial discrimination.

“I’m a heterosexual man. I never been gay a day of my life,” he explained. “I used to be homophobic, but as I got older, I realized that wasn’t the way to do things. I don’t discriminate against anybody for their sexual preference, for their skin color… That’s immature. Not only that, not only do I know the difference between that, but I’m wise enough to know that that’s just stupid and wrong, and I’m just trying to spread that to everybody.”

In a different interview early in 2012, he shared more of these views.

“I like women. I love women,” he noted. “I’m not going to not be your friend because you like men. As long as you’re a great person and, aside from that, y’know, you don’t bother me and make me uncomfortable, then let’s be friends, dude… It doesn’t matter. You don’t see people for being gay. People need to leave gay people the fuck alone. Like, who cares? If you still care about shit like that you need to just hang yourself like the rest of them KKK mothafuckers.”

In the past, Rocky has also discussed his friendship with Banks and has said she should not beef with people.

“I like her for what she’s worth,” he said of Banks, who was feuding with T.I. “I do think she gotta chill out with the beefin’ and all that other stuff and disrespecting the O.G.s. She the homegirl, so it ain’t nothin’ but a little talk to her. I think if she stays out of trouble, she’ll have longevity.”