XXL has revealed their Freshman Class cover for 2013. The cover features ScHoolboy Q, Ab-Soul and Action Bronson, among others. They join a list of emcees to be on the Freshman Class list over the years that includes Kendrick Lamar, Mac Miller and more.

Fellow Top Dawg Entertainment emcees ScHoolboy Q and Ab-Soul made the list after grinding it out in the West Coast underground. The two members of Black Hippy would later make a name for themselves and their group with solo projects and collaborations that would catapult them out of the underground scene. Both dropped critically acclaimed efforts last year with Q’s Habits & Contradictions and Ab’s #controlsystem.

Three emcees with dollar signs in their names also made the list. Trinidad Jame$ hit the scene with last year’s “All Gold Everything.” Joey Bada$$ did the same with “1999” and has garnered praise for his individual work as well as his work alongside Pro Era. Travi$ Scott also gained notoriety last year. He generated his buzz and was signed to G.O.O.D. Music.

Logic also made the list. The Gaithersburg, Maryland rapper, also known as Young Sinatra, has generated some buzz through his various mixtapes including last year’s “Undeniable.”

Kirko Bangz’s inclusion on the list comes after hustling through the Houston, Texas scene. In 2011, Bangz earned success on the charts with “Drank in my Cup” making it onto the Billboard Hot 100 and he’s continued releasing his “Procrastination Kills” mixtapes.

Funk Volume’s presence is also found on this year’s list. With Hopsin being a former Freshman, it’s Dizzy Wright’s turn to be featured here. Dizzy’s own work through Las Vegas, Nevada has helped him climb to more exposure with FV and last year’s SmokeOut Conversations helped that buzz become stronger. One of the artists featured on SmokeOut Conversations is also on this list, with Angel Haze making it through after releasing two mixtapes last year, “Reservation” and “Classick.”

Action Bronson rounds out the list after an impressive 2012. He released mixtapes like “Blue Chips” with Party Supplies and “Rare Chandeliers” with The Alchemist to great critical praise. Before that, he was building his own buzz in and out of Queens, New York, with efforts like “The Program EP” and Well-Done with Statik Selektah.

Chief Keef does not appear in the cover picture but was named the 11th Freshman. His photo appears as a small addition to the cover. He made his name last year with the release of Finally Rich and the success and controversy surrounding “I Don’t Like.”

As noted, the list has featured many notable emcees in the past. Kendrick Lamar, French Montana, Macklemore, Wiz Khalifa and Iggy Azalea have been on past lists. 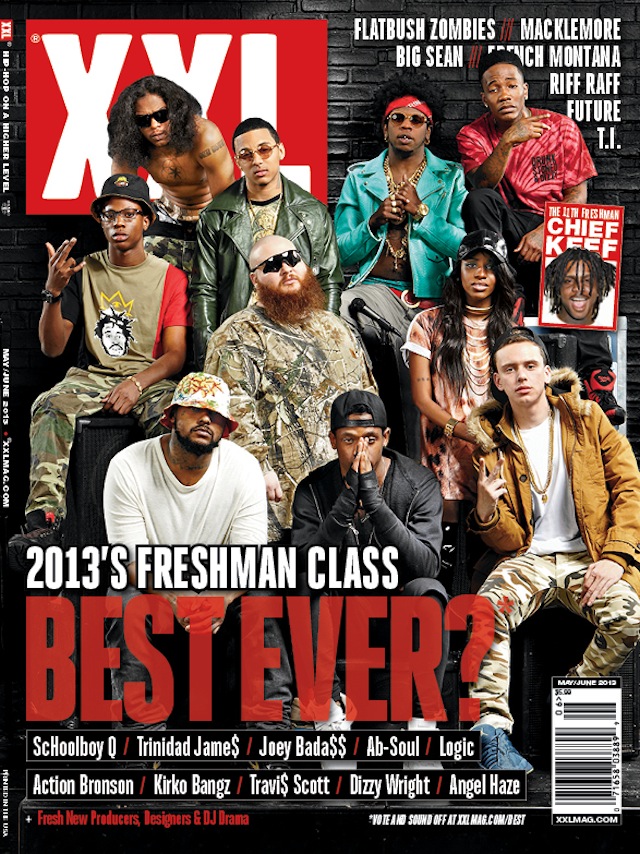