With six albums and a myriad of number one singles to his name, there’s little question that DJ Khaled has established himself as one of rap’s most bankable stars. Now, in a recent video documentary, DJ Khaled announces the title of his seventh album, Suffering From Success.

In explaining the album’s title, Khaled recalled he was visiting a doctor after he developed a bald spot in his beard due to stress. After watching Khaled deal with a host of business calls while in the doctor’s appointment, Khaled’s doctor pulled him aside and warned him that his success was having an adverse effect on his health, saying that he’s “suffering from success.”

“We just got done turning in [Rick] Ross’ album, and people don’t realize, when you turn in an album, it’s a lot of work behind the scenes,” he recalled. “At that time, I’m running around and I notice…a big bald spot [on my beard]. I’m acting like I don’t want to see it, I’m brushing it away and it kept getting it bigger and bigger. When I finally got home off the road, I was like, ‘I’ma go to the doctors’…[the doctor] said [it’s a disorder] that comes from your nerves and your stress, but [she] gave me some medication.”

He continued, “Through that whole process while I’m at the doctor’s, my phone’s ringing, I’m dealing with marketing people, I’m dealing with lawyers…she found out who I was, and after watching that 45 minute doctor’s session, she grabbed my shoulder and she just goes, ‘Son, you’re suffering from success.’ I looked at her and was like, ‘That might be the realest thing you can tell me.'”

UPDATE: Releasing on September 24, DJ Khaled has revealed the cover art from Suffering From Success, according to HotNewHipHop.com: 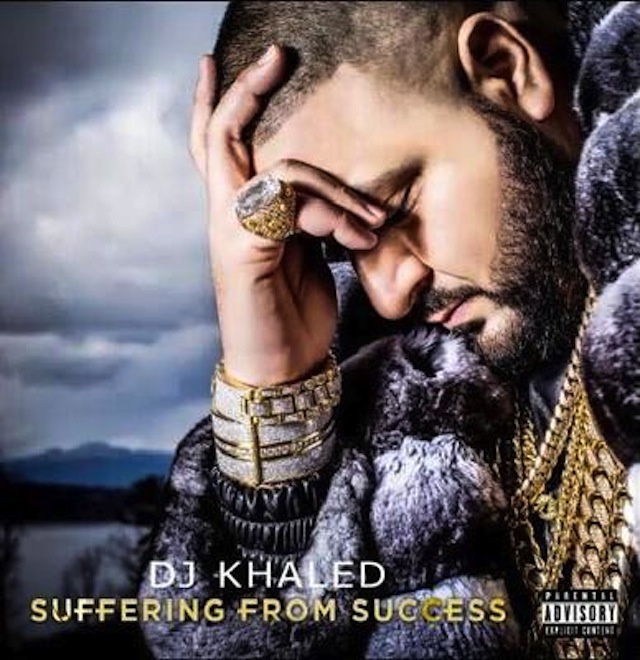 UPDATE: DJ Khaled has announced that his album, Suffering From Success, has been pushed back.

“I moved the date back because it got greater.” Khaled said in a video released through We The Best. “I told you I’m working on the biggest masterpiece ever. I just recorded something so crazy that it’s going to have the whole streets erupt, earthquake-style. Shit got even realer. This shit [is] serious.”

UPDATE: The tracklisting for DJ Khaled’s Suffering from Success has been released. It can be viewed below, via MissInfo.

UPDATE #2: The stream for DJ Khaled’s Suffering From Success is now available.