It’s been a number of years since it was announced that Evidence and The Alchemist would be joining forces under the moniker Step Brothers. Now, in a recent interview with 2DopeBoyz, the Dilated Peoples emcees discusses his and the A-L-C’s upcoming album together.

According to Ev, the Step Brothers’ album Lord Steppington is completed and lined up for a release sometime in early 2013. He said that the duo’s already enlisted the likes of Styles P, Action Bronson and Domo Genesis for the project.

“The album is pretty much done and we just signed a deal. The deal’s finished, I got my check,” he said. “I was gonna tell everybody who we signed with the other day, we were going to put out a little video but we didn’t get a chance because [Alchemist] and Prodigy had a show and they were rehearsing or whatever. But yeah, that’s it; Step Brothers is official, the album title is set and the label is on…we’ve got some dope people [on the project], we’ve got Domo Genesis on it, we got Styles P on it so far, Action Bronson’s on it. Alchemist’s done all the beats on it so far, I did one…once we master it and I get the product in, then we’ll give you date…but until we announce it, I’d say early 2013.”

Evidence also discussed Dilated Peoples’ upcoming fifth album Directors of Photography. He said that he, Rakaa Iriscience and DJ Babu have been working diligently on the album, and that they’re trying to push their musical boundaries with the project.

“Directors of Photography is the next Dilated album. We’re focusing a lot on that album, that’s what I’m doing everyday pretty much,” he said. “Dilated, it’s gonna be our first album in six years, so it’s important that we nail this right now. I think we’ve bee, going as far as you can go, like making sure we’re pushing the boundaries and testing ourselves before it becomes not fun. We’re really going to the edge, then it’s like, if we go any further, we’re going to be having a bad time.”

UPDATE: Over seven months since the last details, Evidence has confirmed via Twitter that his first full-length project with Alchemist, Lord Steppington, as Step Brothers, will release on November 19, via Rhymesayers Entertainment. Two years ago, Ev releases Cats & Dogs on the label co-founded by Atmosphere and Siddiq.

To everyone who was saying that Step Bros ain’t dropping this year… Nov 19th is the day. @rhymesayers #LordSteppington

He added that Dilated Peoples’ Directors Of Photography will follow.

UPDATE #2: Step Brothers’ Lord Steppington is now set to be available January 21, 2014. The pushback was due to manufacturing issues, according to a press release.

The project is slated to include Action Bronson, Roc Marciano, Blu, Styles P, Domo Genesis, Fashawn and Rakaa Iriscience, among others.

The full tracklisting for the album can be found below, followed by the cover art. 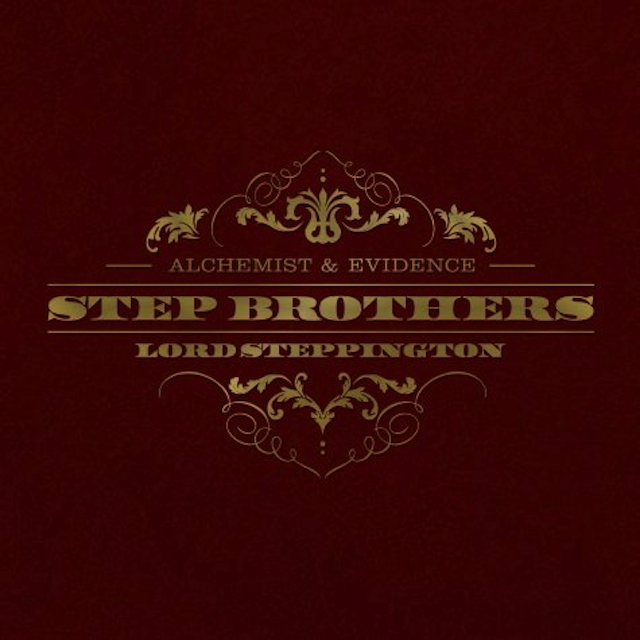 UPDATE #3: Rhymesayers Entertainment has revealed the album packaging for Lord Steppington. The CD and vinyl versions come with velvet covers, which can be seen in the hands-on video below.

UPDATE #4: Evidence and Alchemist have made the stream for Lord Steppington available a day before its official release date (January 21).

HipHopDX’s review of Lord Steppington and a feature interview with Step Brothers were published today (January 20).

The album can be streamed below.