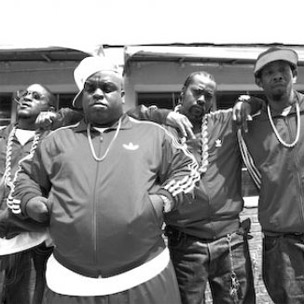 Goodie Mob is currently in the studio putting in work on their upcoming reunion album Age Against the Machine, recently lensing two videos for “Is That You God” and “Fight to Win.” While on the set, the group took a few moments to chop it up with MTV News, explaining the project and why they’re filming clips for a pair of songs.

“We doing a two-part video. We’re doing one that’s called ‘Is That You God,’ which a portion of it was featured on ATL around ’04, ’05, so this song has been around for a while but it got picked back up by Barry Hankerson of Blackground Entertainment,” said Cee Lo Green. “He wanted to license it for the usage for a new project that he’s doing called The Obama Effect, which was perfect timing for us because we were just gearing up to campaign Goodie Mob. It came at a very fateful time if you will, and so here we are shooting the video for that.”

Khujo added that the group is returning at an appropriate time for music. “We back where we left from. Putting a message in the music, motivating and inspiring people. Just to keep going, because we’re going through some tough, turbulent times right now.”