Tech N9ne Performs "The Noose" For U.S. Troops Live For The First Time

Earlier in the week, a bulk of the remaining American troops left Iraq, punctuating the end of a war in Iraq that has lasted nearly a decade. A number of the troops were privy to a performance by Tech N9ne as part of a weeklong USO/Armed Forces Entertainment tour. Tech was inspired by America’s troops to record “The Noose,”

which can be found on his latest release Welcome To Strangeland: Tech N9ne Collabos.

“I was inspired to go out on a USO tour by my military fans and all the wounded warriors I met at Camp Pendleton [Calif.],” Tech N9ne recently told representatives from the USO. “I can’t wait to fly over to the Middle East and spend time with our men and women in uniform. I am so thankful for their service and sacrifice and I plan to deliver some shows they will never forget.” 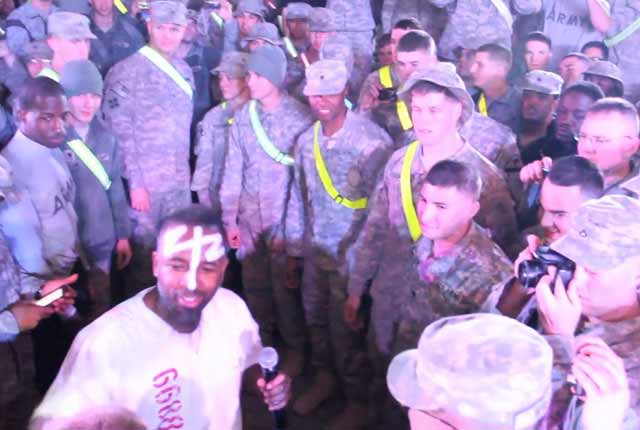 After breaking two ribs while attempting to climb into an Apache helicopter, military doctors warned Tech against performing additional USO shows. In true, “Strange” fashion, Tech shrugged off the injury and still hit the stage. The tour performance, which you can watch exclusively on HipHopDX, caps off a commercially and critically successful year for Tech N9ne. In 2012 the Kansas City emcee saw his All 6’s And 7’s album debut at the number four spot on Billboard magazine’s Top 100 chart. Additionally, HipHopDX has recognized Tech as 2011’s Emcee of the Year.