Now, with the passing of Nate Dogg, Warren G intends to memorialize his fallen friend with “This Is Dedicated To You.”

“Regulatin’ the era, standing side by side and we down for whatever / that’s the days of the past now I’m looking at the future like fuck, I don’t even wanna do music!” rhymes Warren on the track.

The song, which is to be released digitally soon, is not an entirely friendly affair, as the G-Child takes imitators of Nate’s style to task. “What the hell is going on? Niggas been biting songs, hell nah that ain’t Nate Dogg!”

As previously reported, Nate Dogg passed away as the result of complications from various strokes he suffered in years past.

UPDATE #2: Warren G premiered “This Is Dedicated To You”

last Friday during Big Boy’s Neighborhood, the syndicated Los Angeles-based morning radio show. There, Warren revealed that the song, which is available for retail tomorrow (April 26), will see its proceeds go directly to Nate Dogg’s mother and the Nate Dogg Foundation, which was created by Snoop Dogg and others. 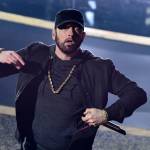 Slim Shady is helping out his longtime manager with a little promo for Audiomack's 'STAMPED' contest.