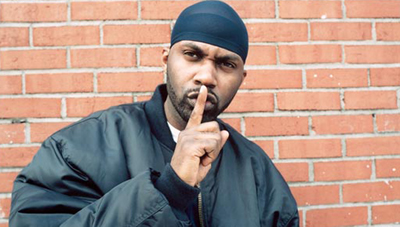 In advance of the trio of Wu-Tang Clan-related projects set for release during these last two weeks in March, HipHopDX spoke with Masta Killa regarding his Live album that will be sharing the shelves with new releases from fellow Wu-Tang Clan members Inspectah Deck (Manifesto) and Method Man, Ghostface Killah and Raekwon (Wu Massacre) as the month comes to a close.

More lively and jovial in his interview with DX than his signature stoically serious monotone on the mic would suggest him to be, the “spoken word slang” deliverer graciously provided exclusive details on the not one, but two studio albums he is planning to trail the release of Live – his first all-new full-lengths in the nearly four years since the release of 2006’s Made In Brooklyn, the arguably less notable follow-up to Killa’s critically-acclaimed solo debut, 2004’s No Said Date. The last addition to Wu, (introduced to the world via the last verse on “Da Mystery Of Chessboxin’”), also shared with DX his thoughts on Wu-Massacre and the currently in-the-news announcement that former Wu-Tang Records president “Mook” Gibbons is looking to find “The Next 9 Generals.”

HipHopDX: The first most obvious question is why a live album?
Masta Killa: A lot of people still haven’t seen Masta Killa perform solo. This was one of my solo shows from the album No Said Date, and I played it back one night and I listened to the shit and I was really impressed with the sound quality. And I was like, “Damn! I killed the shit like that? I think the people need to hear that. It might encourage them to come out and see a Masta Killa live show. I think they’ll really appreciate that.”

DX: And you said it was all recorded at one show?
Masta Killa: One show, correct. It was the first show when I first dropped the album [No Said Date]. It was the show at B.B. King’s. I’ve always had the audio recording, but one night I was checking it out and I was like, “Damn! This is…” I have a few live albums that I always love, Parliament Funkadelic that’s a group that gave me – I think a lot of their recordings, the Mothership Connection and all that shit, was live. And I love that album. It’s not on a Mothership Connection level, [Laughs] but on a Hip Hop level I thought the fans could really appreciate it.

DX: And when can fans next see you live in the flesh? Any upcoming tour plans?
Masta Killa: Yeah, definitely. I have a date of April 8th [that] I’m gonna be on the westside [in Los Angeles]. I forget the exact venue but the date is April 8th and we gonna set it from right there and see where it takes us. I’m not even sure of all the [tour] details yet. We’re still bangin’ it out and trying to put it together, so I’m just gonna go with the flow. But that’s definitely the starting point.

DX: The second most obvious question I have for you is when we gettin’ the next studio album? It’s going on four years since Made In Brooklyn so I know the fans are starving at this point for a new Masta Killa solo album.
Masta Killa: I appreciate that, family. Loyalty Is Royalty is coming out the oven as we speak, the only thing I gotta do is put the icing on it. So the cake is baked already. But, I kinda wanted to warm it up with the Live On Stage to give the fans like I said the opportunity to hear the live performance. But then the Loyalty Is Royalty album is coming right behind that. So, it’s gonna be a Masta Killa wave right now and I’m coming like the tsunami.

DX: Loyalty Is Royalty, that’s dope. Is that gonna be like themed out in any way, or is that just a overall concept?
Masta Killa: That’s basically a beautiful principle of life that a lot of people should practice. I’ve heard that title for years and years, that saying, that phrase, so to take the phrase and publicize it to another level of putting [it out there] for an album title I think the exposure of it…just like I said the phrase itself is a statement that can be lived.

DX: We got like a timeframe here, like you think summer, fall?
Masta Killa: I would say…you know what I’m gonna say? No said date. [Laughs] But I’d say definitely by June you should have something though.

DX: Is that you; is that your company?
Masta Killa: Yes.

DX: You said you’re done, it’s cooked, [so] can we give out like [the] producers and guest lineup yet, or is it too early?
Masta Killa: I didn’t do… With the Made In Brooklyn and the No Said Date I basically gave you classic Wu material as far as having the family involved. I don’t have the family involved as much, but I do have beautiful production from 9th Wonder, P.F. Cuttin’, True Master. And the quality of substance [with] how the lyrics are coming, I think it’s just a beautiful project that I think you’ll really appreciate it.

DX: Yeah if True Master gave you anything on the level of “Queen” we’ll be straight. [Laughs.]
Masta Killa: [Laughs] Yeah, he gave me some smokers, man, he always do. I appreciate that, brother.

DX: Just for the Wu die-hards, the family that is involved so far can you give me the names?
Masta Killa: So far I’m really probably just gonna have Meth – Meth and probably Cappadonna. Um…maybe Ghost…maybe GZA. But I’m just not sure yet. And it won’t go past those three or four members. If I even use the material that I have from those brothers, because we constantly work. I have a lot of material that I’m always working on, and I can always pick and choose and shuffle the deck to see what would go where. So, I can’t really see myself using more than at least four Clan members, if that – three to four Clan members on this particular project. But I’m definitely working diligently to make sure that the meal is gonna taste good to the people.

DX: Are you eyeing any particular song to be the first 12”?
Masta Killa: I have a song in mind [produced by P.F. Cuttin’] called “Things Just Ain’t The Same”

that I’m looking to release real soon on INgrooves Digital. So you’ll probably be seeing something on that real soon.

DX: Is the whole album gonna be digital or is there gonna be CDs?
Masta Killa: Well, yeah eventually, yes, but I think I’m gonna go right out the gate digitally first though.

DX: Now, I gotta switch gears here and get your thoughts on a couple recent Wu-related items of note, the first one being John “Mook” Gibbons’ doing a sorta Wu-Tang version of American Idol to find “The Next 9 Generals.” Just wanna get your thoughts on this, if this is a Masta Killa-endorsed endeavor?
Masta Killa: Absolutely not.

DX: Yeah, he’s doing like some sort of – just going around to different cities I guess and doing like I said like an American Idol to find, I dunno, some sort of new Wu-Tang Clan group or something.
Masta Killa: [Says sarcastically] Oh wow, that sounds real exciting. [Laughs]

DX: Well next time you’re near a computer go to WuCompetition.com.
Masta Killa: Okay, I’ll definitely check that out.

DX: It raised my eyebrow because it says you gotta pay a $23.50 registration fee to be part of the contest.
Masta Killa: [Says with surprise] What? Damn! [Laughs.] Wow. Shit, dog. Hey, more power to the brothers, man. Hey, I don’t know, man…

DX: Well, I had a feeling that topic wasn’t much to talk about. Another Wu-related item I do need to ask you about is the Wu Massacre project, since it’s gonna be dropping the same day as your live album. You’re not featured on it, but I wanted to get your thoughts on Meth, Rae and Ghost uniting for this trio?
Masta Killa: When you see different brothers coming together to do different projects, I mean, there’s endless amount of chambers that we can always create. When you see different brothers coming together collectively to do a project or something, it’s just like another volume, it’s just another movie. And this movie, you didn’t have all the five deadly venoms, you might only had two of the five deadly venoms but it was still a classic movie. So you know, I love brothers for always being creative, and just coming with new ideas and new things to entertain the people. I actually sent a verse in for that project, but Ghost liked it so much he slid it underneath the table and said he was gonna keep it for his next project. [Laughs] So I was definitely called on the project, but like I said the work ethics that I gave I guess my brother liked it and he plans to use it towards his future projects.

DX: Yeah I think there were some issues, just in general, with what they were submitting ‘cause Meth was just telling MTV that Def Jam was like rushing the project, so…
Masta Killa: It did come out of nowhere; it was a surprise. But, I [still] gave the effort to definitely do whatever I can do [for it]. Those are my brothers, I love them. But, I just have big solo ambitions, and when you’re playing for an all-star team sometimes you gotta go and branch off and do your own thing just to be able to quench your own individuality of what you wanna express artistically for yourself.

DX: Just wanna wrap things up by getting a rundown of any other projects you got on deck for 2010…
Masta Killa: I’m gonna set it off with the Live on Stage. I’m gonna come back with the Loyalty Is Royalty. And the three punch combination I’m gonna hit you with the Soul And Substance. That’s the next project that I’m gonna drop after Loyalty Is Royalty. I’m already on cock [and] I’m just ready to start firing, brother.

DX: Well I’m not gonna keep you any longer, man… Make sure you check out WuCompetition.com. [Laughs]
Masta Killa: Oh, man [Laughs.] I don’t think I’m gonna be in any rush to do that but I’ll check it out though. [Laughs]

DX: You should sign up, do it as like an undercover thing, see if Masta Killa gets picked. [Laughs]
Masta Killa: Oh, that would be crazy, right? [Laughs]