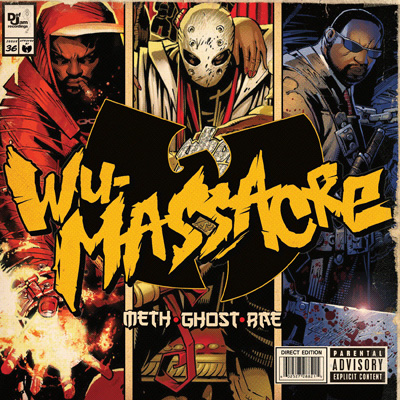 While prepping for the long-awaited Wu-Massacre, Wu-Tang Clan producer/DJ Allah Mathematics has been busy in the lab working on his own artists. Bad Luck (featured on Return of the Wu track “Early Grave”

with the late Ol’ Dirty Bastard) and Eyes Low (both set to be on Raekwon, Ghostface Killah & Method Man’s Wu-Massacre March album on Def Jam) are two artists with projects Math plans to roll out in 2010. “Eyes Low, we just finished the album called Love and Loyalty dropping this year. It’s got some special guest appearances on there,” Mathematics recently told HipHopDX. “Not a lot because he can really hold it by himself. I’m also working on another Wu project – I’m gonna keep that one under wraps right now.”

Known to many as the unsung production hero of Wu-Tang Clan, Mathematics has been a part of the super-group since the early days, even designing the Wu-Tang’s trademark “W” logo. “We tried a few different things, but when it came down to it – and RZA basically needed the logo the next day – that’s the W that I did,” Math explains. “In the beginning I did one you can probably find in RZA’s book The Manual with a hand coming out of the ‘W’ holding a head. That one might’ve been a little too gory.”

Further speaking about his Clan closeness, Math who has toured with all nine Wu-Tang members recounted his favorite touring memory:

“I think we were on the Rage Against the Machine Tour. GZA brought his son Kareem [Justice] with him on the road. I went to my room, I was making beats. That was when I did that joint with Andre Rison and Ghostface ‘Fast Life.’ Ricky Waters – who was a football player too – did a joint with True Master and Meth on that same album. He came to the show and brought some of his boys and they were emcees. He brought them to my room and I had the beat playing. Streetlife was in there, [Inspectah] Deck was in there, I forget who else. Kareem was in there, just standing and listening. He had his arms folded, and he was just making this face like, ‘Do you hear these dudes?’ Then after a while he came out like ‘Yo wassup! Y’all is corny! Yo Math, gimme the beat!’ Then he started rhyming and his flow was crazy. He started killin’ them with his flow alone. He was only five years old! What was wild is on Only Built 4 Cuban Linx…Pt. II on the Slick Rick track, “We Will Rob You,” he produced that track.”

mixtape – Mathematics has also produced a slew of Wu tracks including the new “Meth Vs. Chef II”

off Wu-Massacre and the critically acclaimed “Mighty Healthy”

off Ghostface’s Supreme Clientele. “People consider ‘Mighty Healthy’ to be [Ghost’s best track],” Math noted to DX. “For me it’s hard to say. I’m a fan of my brother’s work.” He also recalls the “glow” about Ghost during that era. “We did that one when we were out in L.A. I remember he did that and ‘Cobra Clutch’ too. [Ghost] was just going in. He had a glow. That whole time period, he had a glow about him. That was how that whole Supreme Clientele came about. It was because of that glow.”

While past Wu-Tang projects involved in person building sessions, Mathematics explains now that most collaborations happen within their home studios. “We used to all be in the studio vibin’ and everybody coming through like all the producers coming through with their tracks. It was like a battle,” Math remembers. “A lot of times [now] we don’t vibe like that; we may talk about a track or whatever and then it’s like I may send it to Meth or whatever and we’ll be sending it back and forth. With Meth I do studio sessions, because we might do a session while we’re on the road, but just like the whole aura and the feel of everybody else being around,” he said, before admitting, “I miss that.”

Beyond his February release with K7/Gold Dust Media, Mathematics is currently podcasting rare and unreleased Wu-Tang tracks in his series The MathFiles as well was gearing for the release of his film The Art of Entertainment, the industry follow-up to his production documentary The Beat Kings. “The Art of Entertainment” will feature Method Man, Ghostface and Raekwon, along with industry executives like VIBE co-founder Len Burnett and famed entertainment accountant Burt Padell.

Purchase Return of the Wu & Friends by Mathematics